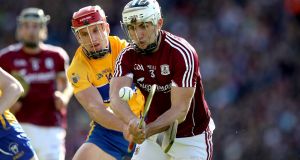 Idea for novel GAA fund-raiser, to be taken around the world: Erect circus tent. Place large cannon at one end. Place Daithí Burke and John Conlon at the other end. Sell tickets. Fire sliotars from cannon between them for a set period – let’s say, somewhere between 70 minutes and 9 hours. Pull up sticks. Count your millions. Repair combatants. Move onto next town.

Gaelic football and hurling were once 15 games within a game. In every corner of the field there was a battle to be won, and if you won enough of the battles, you won the war.

Now match-ups are a more fluid affair. Where once you could be fairly sure of who was marking who by adding up the number the forward was wearing, and the number on the defender’s jersey, and getting 17, it can be a little more difficult to tie down who is marking who these days.

But sometimes a battle exists within the game, and outside and above it too. There is something primeval about a full-back jogging into his position, to be joined by a full-forward. Both with big reputations, both with no intention of playing anywhere else. The unstoppable force meets the immovable object. The castle walls must not fall, the citadel must be stormed.

And so it was on Saturday evening. Burke and Conlon – two huge men, both the form players in their position this year, both with the hopes of a county resting on those broad shoulders.

Anyone who was in Pearse Stadium for the Galway/Kilkenny game in May will remember the shuddering hit Daithí Burke put in on Luke Scanlon that day, as he ran in towards goal from his posting at left half forward. It was without doubt deserving of the yellow card which followed, but it didn’t half send out a message. ‘Step into the realm you’re bound to get caught, and from this worldly life you’ll soon depart’, as The Roots might say.

As for Conlon, he’s had the year of his life. The way he just mowed down Willie Devereux for his final score in injury time of the quarter-final against Wexford was his 2018 season in microcosm – a force of nature, with an assassin’s eye for a point.

In these situations, there’s often only one winner. When it’s as primordial as these two like it, the idea of an honourable draw seems as incongruous as it would’ve done in the Colosseum. But after the almost 100 minutes of madness on Saturday night, you couldn’t really call it.

Both men had their moments. Conlon hit four points from play in a brilliant second-half performance, but he had to, because Burke had a magnificent, towering first half.

Conlon watched his team-mates hit five outrageous wides in the first half of extra-time before they finally played him a ball – which he promptly won and put on a plate for Ian Galvin’s second point of the match.

Both men then went for the ball that looked set to win it all in injury time of the last period of extra-time, and down came Burke with it, which he laid off to Johnny Coen for Galway’s last score.

But throughout, the struggle as the ball was struck in their direction from 80 or 90 yards away was outrageously fierce. Time and again the eye was drawn to them, not the ball, as it travelled in their direction, and the jockeying for the optimal position before the ball arrived at all was seismic. Plant your feet, back up your man, stick your elbow in his face-guard, take the punishment. Then the ball would actually drop between them, and the hits would go up another notch.

Unbelievably, given the ease with which Davy Glennon and Tony Kelly won frees at vital stages of the game, there was only one free given in any of their direct one-to-one collisions (against Conlon!) in the entire game as far as I could see, which beggared belief in ways – given the physicality on show.

But there also didn’t appear to be any posturing, any of the pointless shoulders in the back after you’d scored a point or hit a clearance . . . and though the helmets might be sheltering a multitude, not even that much talk. Maybe they were nattering away like Gore Vidal and William F Buckley under there, but they both strike me as the strong, silent type. They both even walk the same way, with the purposeful, chest-out, legs-apart stride of a John Wayne character.

One of the things that you can be legitimately be sorry about this summer is the absence of another instalment of the Diarmuid Connolly/Lee Keegan rivalry. But we have another serving of this on Sunday – and we have every right to expect more fireworks.