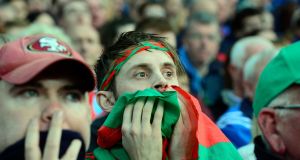 Mayo fans show their tension near the end of the replayed All-Ireland final at Croke Park. Photograph: Cyril Byrne

The Mayo fans I spoke to at half-time last Saturday just wanted it to be over. If I’d offered it, the B.A. Baracus solution – a good-natured crack across the head to knock them out for 35 or 40 minutes – would’ve seemed ideal. Wake up, find out the result, and miss out on the torture that this football lark had become. This is not what it’s supposed to be like, and yet that’s the situation they find themselves in.

The journey to an All-Ireland final should be enjoyable, but it’s not. Not any more. Mayo even had their little change of scenery this year, a few games in the qualifiers to freshen things up. But they still found themselves in Croker in August, still trying to win an All-Ireland quarter-final, not feeling any fresher, not any more energised, not under any less pressure.

I attended both All-Ireland finals with a mate of mine, whose Dad is from Mayo but who lives in Leinster, and our reaction after the drawn game was that, either way, wouldn’t it be great to be on-board the Mayo bandwagon? What days they’ve given their fans, what memories . . . but we weren’t saying that on Saturday.

And in truth, there weren’t many Mayo people enjoying the game on Saturday, or the drawn game two Sundays before. The journey should be as enjoyable as the destination, right? No one in their right mind really believes that, but the feeling is that it should be in the same general ball-park.

But this has gone so far past enjoyment now for Mayo people. It matters too much to them all for their emotions to ever be described by a word as frivolous as ‘enjoyment’.

Mark Horgan, producer of our Second Captains podcast with the Irish Times, was on our show on Monday talking about how, as he watched the later years of his brother, Shane’s, rugby career with Leinster, his desperation to see his brother win something – anything – meant that rugby became a torture to him.

For Mark, every game up until the 2009 Heineken Cup final against Leicester was a nightmare to be endured. He was at the drawn All-Ireland final and saw that hugely intense, familial relationship being repeated – only it’s an entire county, feeling that connection with an entire squad of players. That’s . . . heavy.

Gordon D’Arcy drew comparison between Leinster and Mayo in his column on Wednesday too, and it’s true that after that win in 2009, Leinster just became another team. But up until the moment they won that European Cup, they were a piñata for anyone who fancied a pop. And they could believe differently, they could fall back on the work they knew they were doing, they could reassure themselves that they weren’t what everyone else said they were but Leinster could do nothing to change that outside perception.

If you said Leinster were bottlers, you would always have the last word. Quite apart from the anger a Leinster player or supporter would feel about that, after a while fighting that assumption would just get so exhausting. All the hysterical coverage of Leinster ended the day they won that first European Cup, and that is how it will be with Mayo. They’ll still be analysed, sure, and their fans will get upset at criticism from time to time, but the fizz will be gone from it – the criticism, and the reaction.

But, until that day, the idea that they can just be judged on their merits is a pipedream.

Getting to an All-Ireland final is becoming an increasingly rare occurrence for any county that isn’t Dublin, Mayo, Kerry or Donegal. Those four teams have fought out the last six All-Ireland finals, since the Down-Cork final of 2010.

With Donegal apparently on the slide, the pool of teams likely to be in next year’s All-Ireland final might have shrunk by 25 per cent. The longer that goes on, the colder the comfort of a great quarter-final or semi-final win will be. And as the Western Bulldogs celebrate the end of their 62-year Aussie Rules grand final drought last week, and the Chicago Cubs begin their baseball playoff campaign this weekend, Mayo’s position in world sport as perennial nearly men looks lonelier and lonelier.

The more I think about it, the more I realise that all sport should be like the Ryder Cup.

Here is an event where we have a team to support, and a team we have some representation on. It’s got history, it’s got tradition, and it’s tremendous entertainment. We have a defined rival, with more than enough reasons to dislike their fan-base. We can get fully emotionally involved for its entire duration . . .. and at the end, you can switch over, watch Match of the Day 2, and have forgotten all about Brooks Koepka and Brandt Snedeker by bedtime.

Every football fan in Mayo forfeited the luxury of that attitude a long time ago.

1 What next for green jersey hero Sam Bennett after the toughest of Tours?
2 Gerry Thornley: Talk of Anglo-French hegemony is over the top
3 The Offload: Saracens prove Pro14 is not fit for purpose
4 Chris Wilder confused by John Egan’s red card at Villa Park
5 Pep Guardiola to play ‘mostly academy players’ in Carabao Cup
Real news has value SUBSCRIBE