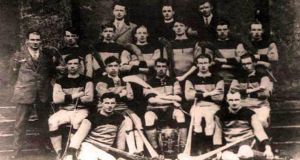 Galway have been in the Leinster championship for nine years, but this weekend marks the first time they host a game in that competition, as the All-Ireland champions play Kilkenny at Pearse Stadium in Salthill. And after four wins for the four home teams in both provinces last week, it might mean a lot come 5.30pm on Sunday.

One of the standout memories of last year was David Burke’s rousing, emotional speech after Galway’s All-Ireland final win over Waterford. Burke’s compassion, careful use of language, openness and honesty were plain for all to see.

It might have been the second-best winning captain’s speech we’ve ever heard – the standard over the years has been uneven, to put it mildly – but there’s still nothing to compare with Joe Connolly’s 1980 tour de force which had wit, brevity, and the sort of lilting, lyrical, beautiful Irish that gives you a pain in your heart just to listen to it.

Add in the fact that Conor Hayes became the first man since Jimmy Doyle to walk up the steps of the Hogan Stand twice as captain, in 1987 and 1988, and you can see that Galway have a bit of a history when it comes to captains making their mark.

This Saturday morning there is another chance to hear Joe Connolly speak, because he will be present at the unveiling of a graveside memorial to honour the first man to lead Galway to an All-Ireland title, Mick Kenny.

Kenny was captain of the 1923 team which beat Limerick (just as Connolly’s men did in 1980) in that year’s All-Ireland final. It wasn’t played until September, 1924, because Limerick refused to start the 1923 championship until all Civil War prisoners had been released, a pretty potent indication of just how chaotic the country was at that time.

Given the iconic status of the three other men to have lifted the Liam MacCarthy Cup for Galway, it would have been a crime to let his memory fade, and a number of people have been involved in ensuring that there’s a memorial marking Kenny’s special status in the game in Calvary Cemetery in his adopted home of Portumna – including Cuala manager Mattie Kenny, Mick’s grand-nephew.

Another man intimately involved in the preservation of Mick Kenny’s memory is the great RTÉ broadcaster and writer (and, with the recent sad death of Tom Murphy, now surely Tuam’s foremost man of letters) Jim Carney, and in his column in the Tuam Herald this week, Jim found room to mention a young French man, Charles Étienne Coquebert de Montbret, who when travelling through Co Galway in May 1791, observed “the game of hurling, usually played in a commonage or turlough with a ball made of cows’ hair knitted tightly and given a leather cover”.

A team from south Galway played a north Tipperary selection in a game, called the All-Ireland final, in the Phoenix Park in 1886, arranged by Michael Cusack, which is not recorded in the annals of the GAA, and never got official recognition but which is known simply as the “forgotten All-Ireland of 1886”.

And Galway were there too in the very first official All-Ireland final of 1887, which they lost to Tipperary. All of which is to say that hurling has always been a part of life in south Galway, even if Galway hasn’t always felt like a full participant in hurling. The importance of Mick Kenny and Mick Kenny’s team is that, for many years, that win was the oxygen that kept hurling in Galway alive.

By a quirk of geography, Galway shares a border with many of the most fervent hotbeds of hurling in the country, but it doesn’t share a province with them. And over the course of 130 years, that has done the county no favours.

This weekend is the first time that Galway can truly feel an equal partner in Leinster. But even before that, going back into antiquity, they were always a wrinkle in the system to be accommodated, whether that be in Munster, or by being given byes into All-Ireland semi-finals. That was seen as an unfair advantage when Galway were good, or a cruel disadvantage, when they weren’t quite so good.

In the long years before 1980, the memory of Mick Kenny and his team might have been the only thing telling Galway hurling people to persist, that better days could lie ahead. On this weekend, when it can finally be said without fear of contradiction that not alone is Galway an equal partner in the All-Ireland hurling championship, but a first among equals as reigning champions, it’s fitting that Mick Kenny is being remembered.

Joe Connolly will be the guest speaker at the monument unveiling at Mick Kenny’s grave this Saturday, May 26th at Calvary Cemetery, Portumna, at 12 noon, and all are welcome to attend.