Ciarán Kilkenny: ‘The energy is pumping, their hearts racing’

The forward believes Dublin have strength in depth. But he won’t look beyond Sunday 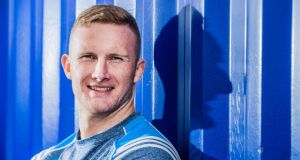 Ciarán Kilkenny: “You’re just so in that bubble – the heat of the battle, in Croke Park.” Photograph: Tommy Dickson/Inpho

It’s a week or so before Jim Gavin starts putting names on his All-Ireland team sheet, and if Ciarán Kilkenny is training like he’s talking then his may well be one of the first on it.

It may well be anyway, but if you believe what Gavin and every Dublin player says about the team being picked entirely on form and not reputation then perhaps Kilkenny does have to prove himself all over again, just like everyone else.

“It’s not a case of thinking it,” Gavin says. “That is the case. There is a blank sheet. And it’s the choice that players make and what they bring to every session that will populate that team sheet of 26 players for the All-Ireland final. We’re looking for players who are consistently on form throughout those sessions, not just one particular game. And there will be some big calls to make.”

It’s just Kilkenny was particularly good in his last game, making more than 60 possessions – it’s hard to be precise, such was his rate of handling – in the 12-point semi-final win over Tyrone: as he talks about that game it’s clear Kilkenny fits all the requirements Gavin is looking for.

“You’re just so in that bubble”

“You’re just so in that bubble – the heat of the battle, in Croke Park. The adrenaline is going; the energy is going,” he says. “I love that feeling of going out there and giving it your all and going play by play. Any given time that I was on the ball I just had to make the right decision for the team, get the man in the better position, so he can make the right decision after that.

“When you are playing against a defensive team as well, their whole attacking impetus is counterattacking, so it is important that you make the right decision and are very patient on the ball.

“And that heat of the battle, the adrenaline, doing the parade around the field in front of 80,000 people, the hair stands up on the back of your neck . . . Going to battle with your team-mates, you can’t beat that. Their veins are pumping, the energy is pumping, their hearts racing.

With our panel you can go out and bleed, run, work as hard as you can – and when you are absolutely spent someone else will come on and do an equal or even better job than you

“With the panel we have at the moment, the beauty of it is you can go out and bleed, run, work as hard as you can. And it’s a great feeling to know that when you are absolutely spent someone else will come on and do an equal or even better job than you. There is such a unity, lads competing so hard to get their spot, but at the end of the day that person will be the first man, if a lad gets ahead of him, to shake his hand and say, ‘Best of luck,” he says. “That’s the buzz. We’re all about the team.”

The next year he got his first senior start for Dublin in the 2012 All-Ireland semi-final against Mayo, and he lost that one too. In March 2014, the year after winning his first All-Ireland at 21, he tore his cruciate ligament and missed the rest of the season.

Still only 24, Kilkenny genuinely appreciates what he’s got; he realised that too in early 2013, just a few weeks after moving to Australia to join the Melbourne AFL club Hawthorn, when he promptly turned his back on the professional game to return to his roots.

He said at the time that faraway fields aren’t always greener, and he still feels that way. “I knew there was a special bond with the Dublin team, and the club as well.” (He won a Dublin junior title with Castleknock in 2012; last year they were senior champions.) “I was only 18, 19 at the time. I’m now 24, and it feels like it just went like a click of the fingers. So you just have to appreciate it as much as you can and be thankful for the people who got you there in the first place. You don’t know what is around the corner.”

Appreciation for the here and now

In his final year as a student teacher, Kilkenny has always been mature beyond his years, that appreciation for the here and now perhaps partly based on the fact that Mayo are the only team who have beaten him in the championship. No way is he looking beyond Sunday, three in a row or whatever else comes with it.

“The way I look at it, this year, 2017, has been a new journey for us – different players involved, different people in management set-ups. You can only look straight ahead, take one step at a time.

“We know the challenge that is ahead of us. Mayo are a great team, very physical team, great tackling team. They have so many different styles of playing, great runners coming from deep, they have great mental resilience, played nine games coming into this game. The personal challenge as a player is to learn from the different experiences.”

Which is why, given all his experiences, Ciarán Kilkenny will be one of the first names on the Dublin team sheet.