‘You guys did the five-peat?!’ To see how far it stretched around the world is special 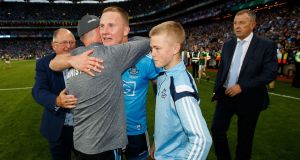 He’s just touched the ground from JFK and the last thing Ciarán Kilkenny is thinking about is any Dublin football retirements. Not when winning that record fifth successive All-Ireland and the glorious aftermath is still being etched into memory.

“There hasn’t been that discussion within the player group,” says Kilkenny. “Or between players and management or anything like that whatsoever.

“I suppose in the aftermath of the game, lads are just soaking in the achievement. And for the past couple of weeks, we just spent some time together and appreciated what we’ve done and how hard we’ve worked.

“Straight away after the game, it’s so hectic - so frantic. You’re celebrating as much as you can. Lads are still in that zone. I haven’t really chatted to anyone about that specifically. We’ve been really just embracing (the achievement) and enjoying it with our family and friends and our club.”

So any indication or otherwise that players like goalkeeper Stephen Cluxton or indeed manager Jim Gavin will still be on board for 2020 will have to wait for another day.

What is certain is that winning the record fifth All-Ireland - Kilkenny’s sixth in all, by the age of 26 - felt different: “It was a massive relief at the end of the game. The mental and physical wear and tear it takes out of you - having the draw and then the preparation for the next day - and then creating that bit of history, it’s been crazy over the last couple of weeks.

“I’m just back from the States this morning. And even to see how far it stretched and how much it means to Irish people all over the world and how much it meant to them to see history being made is pretty special. Even Irish Americans that wouldn’t be big GAA fans, you hear them saying (he puts on an American accent) ‘you guys did the five-peat?!’ To see how far it stretched around the world is special. And humbling for us.”

“You end up just bumping into Irish people everywhere. One of the mornings there was an Irish girl serving us breakfast and she was like ‘well done on the game’ around Times Square there. So it was really cool.”

After that long weekend in New York with team mates Dean Rock and Paddy Andrews, Kilkenny is in Dublin as a Sure brand ambassador to help present the GAA Stats season review - which are telling on both the team and individual count.

Kilkenny’s shot selection appears to have improved year-on-year; while he attempted fewer shots this year, his shot efficiency rose from 61 per cent last year to 74 per cent in 2019. The contrast between Kilkenny’s stats in the drawn final and his man-of-the-match performance in the replay are also revealing.

Dublin’s shot efficiency improved on the previous two campaigns at 66 per cent compared with 64 per cent and 62per cent in 2018 and 2017 respectively.

Scores from play were a key factor in deciding the replay versus Kerry. From play, Dublin converted 18 of their 28 scoring opportunities, while Kerry only managed to score 11 of their 24 chances; Dublin won 85 per cent of their own kick-outs and won 27 per cent of all opposition kick-outs.

1 Cheltenham faces criticism after racegoers suffer Covid-19 symptoms
2 Ian O’Riordan: Learning to run for the first time all over again
3 Cycling Ireland thrilled with take-up for Zwift League series
4 Coronavirus crisis could cost the GAA up to €60 million
5 My favourite sporting moment: Shels finally make all the heartbreak worth it
Real news has value SUBSCRIBE