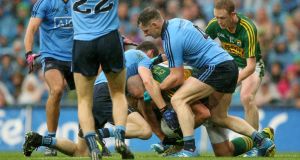 Dublin may be All-Ireland champions - and the GAA 2015 season may be at a close - but the county’s latest disciplinary issue just doesn’t seem to be going away.

Jim Gavin’s team won a third All-Ireland in five years by beating Kerry 0-12 to 0-9 in Croke Park on Sunday, their defensive organisation and lower error count in horrid conditions making them more than worthy champions.

Yet one moment which has strung the conversation ever since has centred on Dublin’s defender Philly McMahon, and what appeared on TV to be a clear eye gouging incident.

Speaking to Marty Morrissey on RTE Radio One’s Morning Ireland programme, McMahon though brushed the incident aside - just as a Ciaran Whelan led Sunday Game panel had done the evening before.

“We’re grown men, we play a physical sport. At the end of the day, the result is what ends it, we shake hands and get on with it,” McMahon explained on Monday morning.

McMahon had given another masterclass of modern corner back play in the final, adding a point to the 1-2 he managed in the semi-final replay, as well as completely nullifying Colm Cooper.

This though was not the first time he, nor his Dublin side have been invovled in similar incidents. Twice in the past three years has a Dublin player been reported for biting incidents, although only once was a ban enforced.

“It’s the heat of the battle. We’d like to say it’s part of our culture is humility and the same with the Kerry lads. What happens on the pitch stays on the pitch. We shook hands and that was the end of it.

“It was a slippy day, the ball was on the ground to be challenged,” he said. “I went down to challenge the ball and he’s a big lad, trying to get around Kieran Donaghy is hard.”

The night before RTE’s Sunday game panel choose not to indulge in the incident, with former Dublin midfielder Whelan saying; “Philly plays the game on the edge. He’s had a phenomenal year for Dublin in terms of his football. As Tomás said, he probably shouldn’t have his hand in there.”

Social media then erupted - former Armagh footballer Tony McEntee tweeted “@TheSundayGame Are you all afraid of legal letters tonight guys. Quit beating round the bush re Philly McMahon. Say it as it is.”

While former Louth manager Aidan O’Rourke was one of many others to contrast the reaction with that of Tiernan McCann’s dive against Monaghan;

“Thats an incredible soft landing 4 McMahon from @TheSundayGame when u consider the hanging other lads received this year for lesser offences.”

McMahon’s view that the incident should have ended upon the final whistle follows the views of Jim Gavin earlier in the year when his player Davy Byrne was hospitalised during a behind closed doors challenge match against Armagh - Gavin though told the media that the two players involved had “had a frank discussion”, and pending a GAA investigation the case was thrown out due to a lack of evidence.

So far there has been no complaints though from the Kerry set-up - and that’s unlikely to change. Dublin can reflect on a third All-Ireland in five years, a second under Gavin in three years, a second clean sweep at that.

When you mesh that with three under-21 All-Ireland’s since 2010, and a minor title in 2012 - they won’t be putting their celebrations on ice any time soon.

Broadcasting pendulum swings back to Gaelic games in 2019