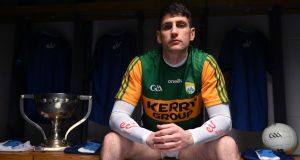 Kerry’s Paul Geaney: “Just get a mark now, and you have a shot at goal.” Photograph: Brendan Moran/Sportsfile

Paul Geaney is the latest high-profile football player to express misgivings about the introduction of the advanced mark. Despite expectations that the two-time All-Star Kerry forward will be one of the foremost beneficiaries of the new rule, Geaney sees it as an unnecessary addition to the game.

“You don’t have to be a good fielder, that’s the problem I have with it,” he says. “You can catch it here [points low down at his feet] and you get a shot at goal for that. I don’t know, it’s there now, it’ll suit some, it won’t suit a lot of others. It wouldn’t always be great placed-ball kickers that win the marks, but everyone is going to have to practise now. That’s a new skill.

“Hopefully it’ll suit Tommy [Walsh, his Kerry teammate]. It’s good to have a guy available in the squad that you can guarantee that that style of play, if we need to play it, that it works.

“You’re in with a shot to win or draw any game with the mark, whereas before if you were attacking a team that were defensively set up you were looking for a lazy foul to get a shot at goal. Whereas just get a mark now, and you have a shot at goal.

“Get the right man getting the mark and you’ve pretty much a draw. On the flip side you don’t want Dean Rock getting a mark in the last second of the game.

“There’s two sides to it. It’s very difficult for defenders now. It’s hard to know – you want them to be tight to stop the mark but then if they’re rolled, if they go all out [to mark tightly] and they’re rolled it’s a goal.

“So it’s very hard to defend it. I think defending is going to suffer as a result. I think it was almost a dying art for a while there. It’s a lot more difficult now, I think. The year will tell us a lot about the new rule changes.”

Above all Geaney’s view is that it’s a rule change that has come in to change a game that was changing anyway. The advanced mark was first talked about seriously almost two years ago, at a time when blanket defences and a lack of adventure were ruining the game. The game has moved on in the interim.

“I don’t think it was necessary. Massed defences aren’t really a thing anymore. They’re not the way the club teams are playing, they’re modelling themselves off the best of the intercounty, and most club teams are playing attacking corner backs the same as the county teams. So I don’t think it was necessary. I’m not sure what the reasoning was for bringing it in. Was it a defensive thing?

“I’d presume it’s about overhead fielding. I don’t know. We’re very quick to bring in rule changes for things that, as I was saying a minute ago, a lot of things are cyclical, the massed defences are cyclical and the game sorted itself out. A team comes along with new coaching methods and problem fixing for that.

“Dublin came along and they just blew that away, then teams start modelling their games on Dublin. Next someone will figure out how to stop that, and that will be the thing for a while. Then it’ll be the next thing, and the next thing.

“I don’t know, usually the game will develop and fix itself in a lot of ways because it’s humans that are in charge of it. It’s not an algorithm that’s unbreakable. It’s mad, like.

“So you bring in rules to change it, you’re forcing things and you’re changing the game permanently then into a game that it wasn’t before. It’s closer to Aussie Rules now. I don’t know is that a good thing or a bad thing. I think a bad thing. And I’m a forward, I should be benefiting from this rule but I just don’t see the warrant in it.”

Corbett helps Laois edge over the line in Ennis

Westmeath reel Armagh back in to salvage a draw