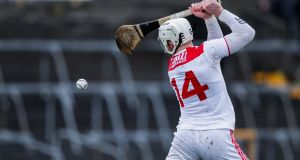 Patrick Horgan of Cork scores a penalty during their Allianz Hurling League Division 1A victory over Westmeath. Photo: Brian Reilly-Troy/Inpho

Cork had to work very hard to defeat a plucky Westmeath side by a four-point margin in very difficult conditions for hurling in Mullingar.

Despite playing with the aid of a strong wind and opening the scoring via Luke Meade after a mere 18 seconds, Cork never got into their stride in the first half. Westmeath equalised when Derek McNicholas pointed in the second minute, but a neat brace of points from Conor Lehane (who had to retire soon afterwards due to injury) and four successful placed balls from Patrick Horgan (three frees and a ‘65’) had the Rebel County lads ahead by 0-7 to 0-1 with 20 minutes elapsed.

Westmeath came into the game at that stage and four unanswered points lifted the home supporters. The scores came courtesy of Allan Devine (three – the second of them from play), and Joey Boyle. Devine should have halved the deficit in added-time, but he was wide from what looked like a routine free. A great sideline cut by Tim O’Mahony rounded off first half scoring, leaving Cork ahead by 0-8 to 0-5 at the interval.

Conditions deteriorated on the change of ends as the rain came down in torrents. A foul on Horgan just 30 seconds after play resumed gave the same player an opportunity from the penalty spot, and his rasping shot gave Aaron McHugh no chance. However, this was cancelled out within two minutes when a Devine ‘65’ went all the way to the back of the Cork net. A great point from McNicholas ensued and the home fans were now in full voice.

In the 43rd minute, a skirmish involving both sides ended with Damien Cahalane being red-carded and Joey Boyle was also dismissed after picking up a second yellow. Westmeath were well in contention, but a fortuitous goal from Bill Cooper in the 55th minute gave the visitors a little breathing space, the centre half back’s innocuous shot from 45 metres squirming through McHugh’s hand.

The Lake County men continued to plug away, with sub Darragh Clinton doing well in attack, and a Devine free and a great long-range point from play by Aonghus Clarke brought the deficit back to a goal (2-10 to 1-10) with 59 minutes elapsed. However, just past the hour mark, Séamus Harnedy was fouled as he headed goalward, and Horgan again made no mistake with a superbly struck penalty to effectively wrap up the two points.

After the match, Cork manager, Kieran Kingston, honed in on the battle his team had endured to win the points. “It was a difficult day for hurling, but it was the same for both teams. We always knew it was going to be a battle and that’s what it turned out to be. We went 0-7 to 0-1 up and we lost Conor (Lehane) with a slight hamstring strain. We took our foot off the gas a bit at that stage. There were mistakes on both sides, but you’re going to have that in this weather. From our perspective, we came up here to get two points and we got them. I thought the lads showed great character in the second half playing into the breeze when we had to battle hard. Each game in this division is difficult, whether you are home or away, and regardless of the opposition. Westmeath showed in their opening two games that they are a battling team,” he said.

Down the corridor, his opposite number, Shane O’Brien, was experiencing mixed emotions. The Dubliner opined: “Naturally, we’re disappointed with the result, but you’d have to be hugely proud of that performance. We felt that game was there for us, particularly at half-time. The wind seemed to die down a bit in the second half, which was a bit of a shame. There are disappointed Westmeath men in that dressing room, and that shows you the ambition that the group have. We were 0-7 to 0-1 down and no heads dropped. Everybody stayed positive. It’s frustrating the small errors that cost you at this level. Overall, today was a day that got away from us. It was a day that we could have made a bit of history here in Mullingar.”