Moloney on song as Tipperary prove too strong for Westmeath 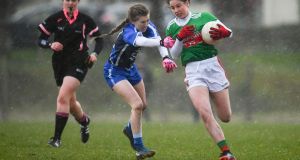 Roisín Durkin of Mayo in action against Waterford’s Aileen Wall during the Lidl Ladies Division One clash at Swinford. Photograph: Sam Barnes/Sportsfile

Aishling Moloney excelled as Tipperary battled their way past a strong and stubborn Westmeath effort to claim a vital win in Division One of the Lidl National Football League at a windswept Bansha.

Another outstanding individual performance saw Moloney kick ten points and it paved the way for the Premier County ladies to claim the win in very tough conditions.

A penalty from Leona Archibold edged Westmeath ahead at the interval, but with Moloney on song in the tough conditions Tipperary pulled clear and ran out 0-11 to 1-6 winners.

Elsewhere in Division One, Peter Leahy’s Mayo picked up their second win from three games as they coped admirably with the conditions and edged past Waterford in a storm-interrupted second-half in Swinford.

The teams were tied at 0-2 each at the interval, but Waterford couldn’t add to Chloe Fennell and Caoimhe McGrath scores in the second period. Instead Mayo made the most of the wind at their backs and four Rachel Kearns points, and one each from Sinead Cafferky and Natasha Gaughan got them over the line on a 0-6 to 0-2 scoreline.

The second half had to be briefly halted when referee Siobhán Coyle called the players off the pitch in the middle of the hail storm, but it didn’t interrupt Mayo’s progress.

The only Lidl Division Two game of the weekend was the late throw-in at Kingspan Breffni as first-half goals from Catherine Dolan, Aisling Maguire, Sinead Greene and Muireann Cusack (2) helped Cavan claim a 6-19 to 1-5 win over Wexford.

Maguire was to the fore in the second half as Cavan picked up their second win of the competition, while Wexford slumped to a third straight loss despite a penalty from Caitríona Murray six minutes before the interval.

In Division Three, after Fermanagh and Roscommon had to be called off on Saturday evening, all three games on Sunday managed to survive the effects of Storm Dennis, and victories for Down and Kildare saw both teams maintain their 100 per cent records as they opened out a lead at the top of the table.

Kildare hosted neighbours Wicklow and the home team pulled clear in the first half thanks to a brace of goals from Nessa Dooley. Amy Murphy hit back for Wicklow just before the interval, but there was no denying Kildare a third straight win and they pulled clear for a 2-11 to 1-7 victory.

Down had the long trip west to Sligo to contend with but they were very impressive winners over the Yeats County on a 3-15 to 3-7 margin.

Ciara Gorman scored a goal in each half for Sligo, but they never really took charge and Down pulled clear in the final quarter with two goals of their own to maintain their excellent start to the season.

And in the final Division Three there were plenty of goals again, but one in each half from Erone Fitzpatrick ensured Laois held on for a 3-6 to 2-6 win over Longford. Kate Whelan also scored an early goal for Laois, who picked up their first win of the season, while Longford pushed them all the way in Heywood.