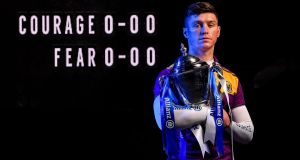 Conor McDonald of Wexford with the Division One trophy at the launch of the 2020 Allianz Hurling Leagues at Croke Park. Photograph: Brendan Moran/Sportsfile

There is a theory among hurling intellectuals that the Davy Fitz factor has a shelf life of two or three years max before it goes stale.

It’s not yet entirely disproven, only in Wexford’s case year four has got off to an impressively fresh start – Saturday’s Walsh Cup final win over Galway coming off the back of a semi-final win over Kilkenny. Better still Wexford won it the hard way, trailing Galway by four points going into injury time before Conor McDonald’s goal helped turned the result over.

“It’s early in the year to be talking about silverware and stuff like that, but it’s obviously nicer to have it than to not,” said McDonald, speaking in Croke Park ahead of this weekend’s opening round of the Allianz Hurling League.

“It’s just worth winning, to be honest. It doesn’t matter about the opposition. The more often you win, you develop a habit, and how to win, and come back from certain situations.”

For a while there was no guarantee that Davy Fitzgerald, the former Waterford and Clare manager, would return for that fourth year, despite the success of 2019 – guiding Wexford to a first Leinster title since 2004, beating Kilkenny, before narrowly losing out in the All-Ireland semi-finals to eventual winners Tipperary.

Then in late September it was announced that Fitzgerald had agreed a two-year extension with Wexford, despite some rumours linking him with the then vacant Galway hurling management position.

“Well I sent 14 WhatsApp messages, 27 text messages, and a couple of Snapchats,” said McDonald, jesting about what he did to help convince Fitzgerald to stay on.

“No, look, I think all the players were really adamant to keep him. And anyone coming in would love to have Davy as well. It was a long road, but we had to respect what he was doing for us as well, and ultimately he came back, which was a massive plus. The player-management bond, the backroom as well, there’s a good aura about the place.”

McDonald certainly doesn’t buy the two or three year shelf life theory: “I remember I was asked that before, going into year three, after being beaten in the quarter-final against Clare, thinking how is this even a thing?

“I don’t know if it’s the group of players he bonds with a bit more, but it’s something I never agreed with, never felt was going to happen, and I think we’ve got stronger with this group of players than he has other teams.

“We’re going into year four now and we’ve obviously got a little bit of success last year. So I don’t know about this whole shelf life thing. He probably proved everyone wrong on that, not that he would even try to do that. I’d say he just knows himself.

“After the semi-final, after the year that we had, I think everyone was so much closer. You could pick up the phone to ring Davy anyway and ask him how he’s getting on, ‘How are things?’ He does that with a lot of the players so I think it was just a constant contact anyway. A few of us went down to Limerick to meet him, just went down as a group of players anyway after the championship.

“I think I was probably just more worried that he wasn’t going to stay with us rather than where he was going to go next. We were adamant to keep him so that’s where . . .the main focus wasn’t really was he going to jump ship to Galway, it was more so, it’s important that we keep him with us.

Wexford begin their league campaign under lights on Saturday evening against Laois and, although still only 24, McDonald is a virtual veteran of the team, having come in at age 17 under then manager Liam Dunne. This marks his eighth senior season already.

“Playing for Wexford is something I always wanted to do, and it probably came earlier than I ever thought it was going to. I hadn’t turned 18 when Liam Dunne asked me to come in against Clare, who were the eventual winners in that year, in 2013. It flies by and like I said, I’m going into my eighth season, 2013 seems like it was a week ago. The day we beat Clare down in Wexford Park, in 2014, that was my first season properly.”

Wexford last won the hurling league in 1973, and what better proof of the lasting Davy Fitz factor if they could win it in 2020.

“I think we’re at a stage where the more games we win, the better momentum we get, the better we perform. The league is very kind of similar to the championship in ways. I don’t see how the league wouldn’t be a priority or a goal, to do our absolute best every day we go out.”