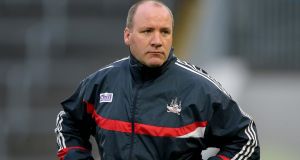 Brian Cuthbert: “In our mindset and in our culture we believe that you must win a minor All-Ireland to win the senior All-Ireland but it’s not actually the case.” Photograph: Donall Farmer/Inpho

The report of the GAA’s Talent Academy and Player Development work group contains a claim that goes to the heart of why the committee was formed in the first place.

“Talent development science tells us that there is limited connection between underage and senior success in sport,” the report states.

If the committee had their way, and it is one of their recommendations, U-17 is the first time a player would concentrate on an All-Ireland championship.

They feel all grades up to and including U-17 should be developmental in status and, much more importantly, in practice, to save the GAA from overworking, burning out and ultimately losing its greatest asset – its young players.

“In our mindset and in our culture we believe that you must win a minor All-Ireland to win the senior All-Ireland but it’s not actually the case,” argued former Cork senior football manager Brian Cuthbert, a member of the committee.

“The majority of stakeholders see underage teams as mini inter-county teams, which is not the case,” said Dempsey.

“We feel if that’s the approach being taken it will lead to drop-out and the overemphasis on winning rather than long-term development and that will not bring through as many players to play with their club or their county. They will not achieve their full potential because their focus has been on winning competitions.

“Change is going to take time. It’s education, it’s governance, changing the competition structure, but we believe by bringing people with us we can change.

“It won’t be easy because the strength of the GAA is that local rivalry, that local competition and winning that competition so it’s going to take time to convince people of the need for change.”

The committee has made key recommendations in areas titled; player pathway framework, education, governance and games programme. Ceasing the practice of playing All-Ireland minor semi-finals and finals before huge senior games at Croke Park is advised.

Underlining the general problem they’re addressing, the committee produced a copy of a text message sent last month to players at one club preparing for the U-14 Féile competition. It demanded that players train three times a week and turn up “20-30 minutes before training starts for foam rolling” exercises.

“This is a real text, this is where we are at,” said Cuthbert.