Dublin inflict another defeat on Carlow 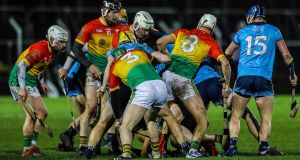 Dublin picked up their second victory of the league following an 11-point win over Carlow in awful conditions for hurling in Dr Cullen Park on Saturday evening.

The winning margin in no way flattered the victors, who squandered numerous goal chances which would have given them even more comfort on the scoreboard.

Carlow trailed by two points at half-time and although they would enjoy the wind advantage after the break Dublin completely dominated the second half.

Rian McBride’s second minute point opened the scoring to give Dublin an early lead, before Martin Kavanagh’s free levelled the game. John Michael Nolan then registered a score to put Carlow in front, but it was quickly cancelled out by McBride’s second point of the day.

Martin Kavanagh and Sean Moran then exchanged points, before scores from McBride and Oisin O’Rorke gave Dublin a 0-6 to 0-4 lead at half-time.

Martin Kavanagh responded with Carlow’s first point of the half, but that was as close as hosts got as Dublin scored five points in succession to seal the win.

Dublin cruised to victory for the remained of the contest and can look forward to hosting Wexford next Saturday, while Carlow’s next game is away to fellow strugglers Laois where defeat will almost certainly condemn them to a relegation play-off.