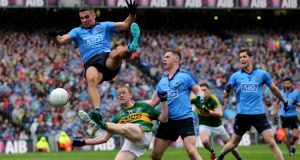 Kerry’s Colm Cooper tries to shoot despite the attentions of James McCarthy and Philly McMahon of Dublin during the All-Ireland SFC Final at Croke Park. Photograph: Ryan Byrne/Inpho 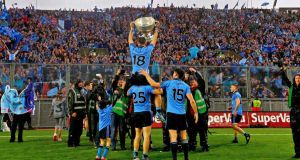 Croke Park surfed the blue wave, as Dublin celebrated an All-Ireland victory as sweet as it was unsightly. Undermined by the torrential rain, which together with a nervousness that appeared to afflict both teams led to a high error count, it was the lowest scoring in 12 years with few players able to give of their best.

Although Dublin were clearly the better team they didn’t manage to translate that onto the scoreboard and ended up under the additional downpour of dropping ball, as Kerry frantically threw everything at securing the late goal that might have turned the match on its head.

Video review suggests that Rory O’Carroll was lucky not to concede a penalty in the 70th minute when appearing to pull down Kieran Donaghy, as a ball dropped into the Dublin square.

The win was sweet because it was the first time Dublin have beaten Kerry in three successive championship encounters (after 2011 and ‘13) and two successive final contests.

Furthermore Jim Gavin’s team have been living on the edge since losing their 2013 crown to Donegal last year and they went into the final under the shadow of suggestions that they’d lost their nerve and would struggle. They must have been among the most questioned bookies’ favourites going into a final.

In the end the disappointment was far more profound for Kerry, who never performed - as acknowledged by manager Eamonn Fitzmaurice. Their highly regarded attack never got traction (literally, on the ice-rink surface) and were well contained by Dublin’s defence.

More disastrously - especially on a day when Stephen Cluxton’s kick-out yips intensified - their centrefield of David Moran and Anthony Maher, by consensus the best in the country, malfunctioned and was outplayed by Dublin’s less heralded unit of Denis Bastic, Michael Darragh Macauley and especially newcomer Brian Fenton, whose movement and hard work were invaluable on such an awful afternoon.

Fifteen seconds into his first All-Ireland final he kicked a point and hit the post with a goal attempt in the 47th minute.

In fact although Cluxton had a nightmare with kick-outs - pressurised by Kerry and unable to take his customary quick re-starts - Dublin’s statistics were better than Kerry’s with just seven out of 19 lost compared with 10 from 24.

This was an impressively gritty performance from Dublin because they must have known as the chances went a-begging in the second half - 10 wides - that they were leaving themselves very vulnerable going into the last 10 minutes but they continually pressed, undaunted by the growing apprehension beginning to grip the blue hordes. 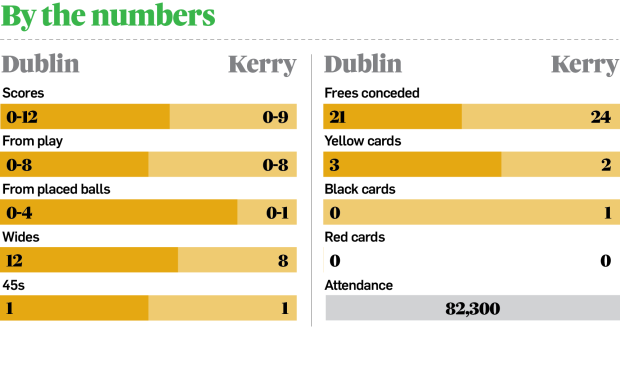 They worked hard though. Diarmuid Connolly, Paul Flynn and Ciarán Kilkenny were well on top of the Kerry half backs and maintained the pressure regardless of the setbacks.

Their composure shone through in the two last points, stretching the lead to three and four points. The first saw Paul Flynn, industrious and reliable after a difficult season, start and finish the move with a great ball to Fenton and super support work to complete the 1-2 and score.

The second represented a four-point turnaround.

Kieran Donaghy had been introduced in the 50th minute and the dropped Kerry captain caused difficulty for Dublin even if his presence as usual appeared to encourage Kerry to treat him as a new Plan A rather than an optional Plan B.

Aside from the penalty claim, Donaghy set up Killian Young, breaking from the back, for a one-on-one goal chance in the 67th minute but the wing back slipped and lost the ball. James Mccarthy intervened to clear and within seconds Alan Brogan, just in as a replacement, was advancing down the left wing weighing up options left and right like a quarter-back.

Having held on in the face of a retreating defence he decided to go for the point himself and flighted over a vital score - a four-point turnaround in less than a minute.

Dublin’s defence was the bulwark of the victory. The spine of O’Carroll and Cian O’Sullivan, who overcame his hamstring injury, was secure although Paul Geaney started well and kicked two from play in the first 26 minutes. O’Carroll though commanded his square well.

O’Sullivan organised the backs with the usual authority although Kerry didn’t test his mobility until bringing on Darran O’Sullivan in the second half, which prompted a switch with Jack McCaffrey.

James O’Donoghue kicked three points but was fading when replaced in the 61st minute although with the team needing a goal, his presence might have been useful particularly as Colm Cooper was struggling.

Philip McMahon marked Cooper so comprehensively that he actually out-scored his much decorated opponent with a first-half point.

That was the last score before the break and concluded the most significant scoring sequence in the match, as the winners went from 0-4 each to an interval lead of 0-8 to 0-4: other scores from Bernard Brogan, snapping up a loose ball and firing over, Jack McCaffrey starting and finishing a move from his own defence and Paddy Andrews, again the most threatening of the full forwards, finishing a fine move by Bastic and Dean Rock with a run past Fionn Fitzgerald and point.

If they nearly won it in the second quarter, they nearly lost it in the third. The best goal chances came when Andrews caught, turned and fired just inches outside the post and then Fenton.

Kevin McManamon was on at the interval and ran hard at Kerry albeit without the usual return.

But the pressure told in the end, as history beckoned and Dublin followed.