Claressa Shields: The US answer to Katie Taylor with a very different image

Son of president’s personal lawyer earns over $90,000 a year in the White House

Acclaimed for his books on the sport, but Harold Seymour never gave his wife credit

America at Large: one of baseball’s biggest cheaters on top of his game in TV

Footballer by trade, golf pro by vocation: the extraordinary life and times of Ronnie O’Brien

By every index hate crimes have gone up year-on-year since 2016 election.

Decline of Sports Illustrated leaves behind fading years of glory

Dave Hannigan: Delle Donne one of the most compelling characters in American sport

Dave Hannigan: Five consecutive weekends with attacks have led to ramped up security

Dave Hannigan: Citadel do the storming and open cupcake debate

America at Large: Shilling for Trump could pay off for Schilling

Cost of women’s soccer in US excluding various ethnic groups

Dave Hannigan: Women's game on a high after World Cup win but only for a few

Wake up ESPN: Trump has made everything – even sport – political

Dave Hannigan: Old ghosts still at play on a visit down memory lane

Kellen Winslow jnr and his sordid double life away from NFL

Zdeno Chara: The 6ft 9in hero of ice hockey in Boston

America at Large: American golfer-turned-pundit is not afraid to ruffle a few feathers

Dave Hannigan: A dodgy doctor, a Swiss courtroom and a sad tale in Ali's great story

In his desperation due to poor health, the greatest put his faith in Dr Rajko Medenica

Richard Dormer: The Laois footballer who became a US police commissioner

America at Large: Emigrant excelled in US but never forgot his roots or his sporting passions

How to buy a US sports scholarship without ever playing sport

MLS must eradicate the cancer of neo-Nazi hooliganism

Dave Hannigan: Fighter now in grimy netherworld of being famous because he’s famous

US women’s soccer team leading the fight against discrimination

Dave Hannigan: Taylor has little to fear from Volante in unification bid

America at Large: Too many women with poor records somehow fighting for world titles

America at Large: Critics argue commentator is more strident about the colour of his toast than the sports he covers

Kansas City Chiefs’ defensive coach has beaten addiction. His brother was not so lucky

How has Tom Brady miraculously defied the ravages of time?

America at Large: Devout Rivers has Baltimore Ravens in his sights

After 12 concussions, Merril Hoge’s stance on CTE is truly head-wrecking

America at Large: Former running back forced to retire is challenging real science

How Muhammad Ali’s hostage negotiating led to an unlikely friendship

America at Large: The screenwriter missed his own Oscar win to watch the New York Knicks

America at Large: the man who paid Muhammad Ali $2.5m to get whupped

America at Large: TV broadcaster signed with former club for most lucrative contract ever but has lost eight of first nine footbal(...)

Dave Hannigan: European teams are cracking soccer in US

Lessons from ill-fated and utterly bonkers USFL were largely ignored

In a sport where verbal crime pays, the Irishman is laughing all the way to the bank

After winning four Olympic golds in Rio, the swimmer was happy to be just another teenager starting college

America at Large: Kronk Gym, a place that offered a ‘chance at life’

NFL cheerleading is just a seedy relic from a bygone era

LeBron James still refusing to ‘shut up and dribble’

America at Large: All eyes on Garoppolo in advance of new NFL campaign

America at Large: Women’s boxing punching well below its weight

Can a sport be deemed professional if most participants cannot earn a living wage from it?

Papa John’s scandal offers an important takeaway for US sport

America at Large: Pizza company founder’s use of N-word led to immediate backlash

US sport’s obsession with the military is commercial patriotism

Voice of the New York Yankees feted for his Sterling service

America at Large: No catchphrase too corny for New York club’s long-serving commentator

Donald Hall was a far better wordsmith than second baseman

A story of Muhammad Ali, a tiny truck stop and an epic road trip

Just what is it that has America’s NBA stars dribbling by day and drinking fine wines by night?

She’s proven she’s good enough but will a team be bold enough to give her the chance?

America at Large: Trump goes to Lou for fitness and health advice

Boxing high on Trump’s agenda after a phonecall from Rocky

America at Large: Trump has said he may offer a full pardon to convicted boxer Jack Johnson

America at Large: LA a fitting stage for the travelling Ibrahimovic show

Late, great writer had exceptional talent and love for scribes such as Seamus Heaney

Humboldt Broncos tragedy strikes at the heart of Canada

You must understand that in Canada, there is hockey and then there is everything else

America at Large: UFC has too many shows and not enough stars

How the remarkable Paul Magriel thrived on chance and chaos

America at Large: The professor of mathematics became a backgammon master before hitting the poker tables

America at Large: McNab a seemingly forgotten part of City’s past

Injustice, exploitation and greed all pervasive in college basketball

America at Large: Taking advantage of young players is at the very heart of the college game

Dave Hannigan: The City of brotherly love quickly descends to hate when it comes to sports

Dave Hannigan: The brutal regime at the heart of US gymnastics

America at Large: Muhammad Ali and the Mormon senator

Buffalo ‘Bills Mafia’ looking forward to their day in the sun

America at Large: Man behind failed XFL wants another go at cashing in on national obsession 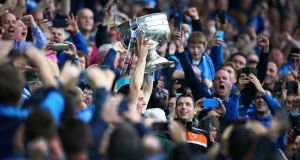 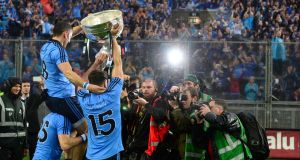 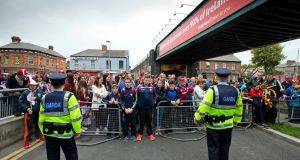