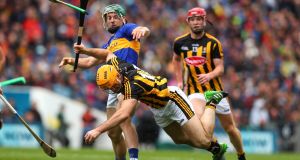 It’s one of those times you’d have paid to be a fly on the wall; Richie Hogan and Cathal Barrett togging out beside each other to play in the same team.

The pair, so at odds just last August when Kilkenny’s Hogan was dismissed for a strike to the head of Tipperary defender Barrett in the All-Ireland final, played together in the recent All-Stars exhibition game in Abu Dhabi.

So how did that conversation go?

“We never brought it up at all,” said Barrett at the launch of On The Ball Team Building training camps which take place on the Dingle Peninsula. “We chit-chatted about everything else. I’m not going to pour salt in any wounds and he’s not going to [bring it up], there’s no point sure. There’s nothing to say really on it between the two of us.”

In Hogan’s absence, Barrett hurled any amount of ball out of the Tipp defence in the All-Ireland decider as the Premier ran out 14-point winners. He was essentially their spare man and took full advantage of Kilkenny’s often aimless deliveries down into an area he comfortably patrolled.

“It was strange alright,” said Barrett of Kilkenny’s tactics. “It was definitely one of the strangest All-Ireland finals that I’ve ever played in because usually you’re in the corner and it’s you and your man and off you go, battle it out there lads. This time I had the whole of the back line to myself to run around and do what I wanted so it was definitely strange, yeah.”

Truth be told, Barrett was a little surprised that Kilkenny made life so easy for him.

“A small bit maybe, yeah,” he nodded. “Maybe I was a small bit surprised that they kept ... but look, they weren’t really pucking the ball down on top of me either, it was more because I had no one on me it was easy for me to just run across to the far side of the field, to where they hit it. I literally just tried to get on as much ball as I possibly could. I was absolutely loving life out there as well, there’s no point saying anything different.”

If that thought, of a delighted Barrett enjoying the freedom of Croke Park on All-Ireland final day, doesn’t energise Kilkenny approaching the 2020 season, nothing will.

Mind you, it’s not been all garlands and ribbons for Barrett either who was dropped from the Tipp panel two years ago for disciplinary reasons. It happened after a Munster championship defeat to Cork and he didn’t feature for the remainder of the campaign.

What made it more difficult was all the headlines about him and, of course, the inevitable social media conversation that followed, throwing up all manner of fantastical stories and rumours.

“I’d have a fierce problem with things like that because, at the end of the day, this is only an amateur sport,” said Barrett. “I don’t get paid for any of it and no one knows any of the sacrifices that we make in our personal lives or anything like that so I don’t really feel that it’s right that your name is constantly thrown into the media, especially when you’re not even part of the bloody panel.

“It’s not fair on the players that are there to wake up and they’re getting ready to play a match and there’s an article on Cathal Barrett and the headline then and he’s not even here, I don’t think that’s fair. Especially for your own family. My mother doesn’t need to see my name in a headline or in some stupid article.

“It’s an amateur sport at the end of the day and we have personal lives as well and family commitments and work commitments and all these things come into account in your career. I’d have a fair issue with things like that now, yeah.”

Barrett reckons Tipp’s strong finish to the decade, claiming two of the last four All-Ireland titles, and winning three in total in the 2010s, will have won over some who doubted the group.

Clare ease into action with 16-point thrashing of Carlow

John Heslin strikes at the death to see Westmeath past Clare