Broadcasting pendulum swings back to Gaelic games in 2019 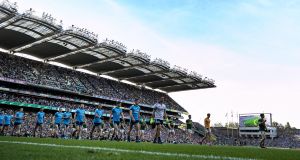 The historic Dublin five-in-a-row final against Kerry and the replay proved the most-watched sports events of the year in 2019. Photograph: Billy Stickland/Inpho

The cyclical nature of television sports audiences has been evident in the viewership figures for 2019, released in the past few days, and confirmation of that will come as a relief to the GAA.

After a worryingly low-profile 2018, during which Gaelic games felt the full force of a remarkable year for Irish rugby, the past 12 months saw the pendulum swing with the historic Dublin five-in-a-row final against Kerry and its replay proving the most-watched sports events of the year.

Curiously it was the replay that scored more highly, as the norm is for the first day to have the bigger audience – the two viewerships coming in at just under a million, 991,000 and 989,000, respectively.

As comforting was the data that showed eight of the top 20 sports broadcasts were GAA fixtures, compared with an historic low of three the previous year.

Although the international appeal of rugby and soccer has pushed Gaelic games off top spot in six of the past 11 years, there will be satisfaction that in a year that saw Ireland defending a Six Nations Grand Slam and contesting the Rugby World Cup – which previously in 2015 saw rugby occupy the top three places – football and hurling competed so robustly.

Soccer was low-key in a year when the national team failed to qualify for Euro 20 but precedent shows that when Ireland do qualify for a major tournament, the viewer engagement is reliably the highest of all sports broadcasts – most recently, in Euro 16, when three of the soccer team’s four fixtures attracted audiences of more than a million.

There is further good news for Gaelic games in the TG4 ratings, which show that they provided the station’s top five broadcasts. The AFL final between Mayo and Kerry pulled in the highest average of 265,000 but the women’s All-Ireland final between three-in-a-row chasing Dublin and Galway had the biggest reach with 558,000.

According to TG4’s Head of Sport Rónán Ó Coisdealbha, the profile of the women’s game is rising all the time.

“The final comes every year after a long summer of live games on RTÉ, culminating in the hurling, men’s football and camogie finals – and viewers are used to watching them. That’s coupled with the profile of the game rising each year. There were over 56,000 in Croke Park for the 2019 All-Ireland. That’s helping us with our viewership.

“This year will be TG4’s 20th All-Ireland and we’re celebrating 20 years of broadcasting and sponsorship involvement with Cumann Peil na mBan. Lidl got in behind it and put a lot of money into an advertising campaign and we cover quite a lot of matches, including the club final at the end of the year. There’s an extensive schedule now, compared to one game back in the 1990s.”

Last year was a good one for TG4, as it rose to sixth-most-watched channel in Ireland, ranking ahead of BBC Two, Virgin Media Three and Channel 4 in this country. Gaelic games coverage has been integral to the success.

“We broadcast quite a substantial amount of GAA games,” said Ó Coisdealbha. “It did very well for us. We get very positive feedback from GAA fans in general. There’s a lot of goodwill out there and a realisation that we’re not just out there to do the club All-Ireland finals or the Allianz Leagues but we also do smaller games.

“On Saturday, for instance, on YouTube we’re doing the intermediate and junior finals from Croke Park. Between YouTube and our main channel there’s a lot of broadcasts. It’s good for us because it raises our profile but it’s also good for GAA fans that so many games are available to them.”

He believes that this is further evidence of the importance of sports – especially live sports – in broadcasting schedules.

“Even looking beyond, at RTÉ and in the UK, it’s becoming obvious that the live sporting event is the one time that so many people are watching together. Everything else is catch-up.

“If you miss something you can access the player and watch it back but you want to see sport live, whether in the sitting room or in a bar with friends. It’s huge really and broadcasters realise that.

“At the end of the day we’re an Irish language TV station and the Irish language is a minority language and stations like us all over the world are competing with bigger competitors. Most houses in Ireland can get the BBCs and ITVs so we’re competing internationally as well.

“We’re lucky to have the rights to some really good games and the sporting audience will come to us because they know that each weekend we have things worth watching.”