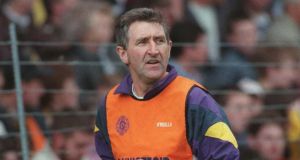 Liam Griffin guided Wexford to an All-Ireland hurling title in 1996. “We had to think about this game in every aspect of it because we weren’t arrogant enough to think that we were so good that we could win otherwise”

Liam Griffin guided Wexford to an All-Ireland hurling title in 1996. It didn’t happen by chance. The devil is in the detail. After defeating Galway in that year’s semi-final, he began compiling a checklist to consider for the final, of the expected and unexpected things that could befall them. He had roughly 1,000 items on his list, using a Dictaphone and notepad to gather them as they popped into his head.

All kinds of scenarios were taken into account, including whether to break early during the march if their opponents Limerick did (which happened, but Wexford’s players carried on marching without taking a look sideways) and what to do if a player was sent off. How would the team react? Someone said to Griffin in training it would never happen. Sure the last time a player was sent off in an All-Ireland hurling final had been Dublin’s Lar Foley in 1961. Yet 34 minutes into the game, Wexford’s wing-forward Éamonn Scallan got the line.

“We had to think about this game in every aspect of it because we weren’t arrogant enough to think that we were so good that we could win otherwise,” says Griffin. “This thing about ‘just win your own ball’ went out before the floods. There’s a lot more to it. Win your own head is the first thing.

Sometimes managers’ planning is so thorough they have to countenance defeat. Liam Sheedy – who lost the 1997 All-Ireland hurling final with Tipperary as a player and managed the county in defeat in 2009 but to victory the following year – travelled up from Tipp with the team on the morning of the finals in 2009 and 2010. He says he arranged for the players’ suits to be deposited at their hotel so they could be collected there after the game. “The danger is that you walk into the stadium in your suit. The last thing you want to be is in a suit after losing a match.”

As manager he used to rehearse several of the big day’s rituals with his men, including the playing of the national anthem and the handshake before throw-in. “I had a football match from Dublin and Kerry taped that I could play, and would often play 15 minutes of a match when the noise volume in Semple Stadium would be real high so you wouldn’t hear yourself because that’s the way it hits. You could be roaring ‘Larry do this’ or ‘Eoin do this’ but they can’t really hear – the noise level in the stadium is just phenomenal. It’s like a coliseum up there on All-Ireland final day.

“Ultimately, you want these guys to go out and perform the way they’re able to play. Sometimes big occasions where there are 82,000 people in the stands or 1.5 million people watching on TV can impact on players. I tried to make sure they wouldn’t be surprised or fazed by anything. I would have known over the years people who said, ‘oh, I lost it in the march’ or ‘I lost it during the anthem’ or ‘in the dressing room beforehand’.”

The mind is a finely balanced thing. Griffin says he noticed one of his players was over-cooked on the day of the 1996 final.

“As they say in sports science, he was over-aroused. He was agitated. I was watching him like a hawk. I called him out before the game and brought him into the towelling area. I said, ‘if you don’t settle down I can’t start you. This is only a game. You’ve got to calm down. It’s all about deep breathing. Try and get yourself more in control.’

“He started poorly and his man got three points from play and we’d to switch him. We took him off in the second half because we thought he wasn’t mentally strong enough and he’d given everything in the course of the game. It was tough on him. I wouldn’t mind but he played very well all year for us. Against Kilkenny he was magnificent. He was a stalwart. He’d have been one of the last men we’d take off in any other game. It was very understandable. This day meant so much to him.”

Eddie Brennan, who won eight All-Ireland winners’ medals with Kilkenny, says that players’ emotions can be drained in the weeks leading to the match by off-field commitments.

“The fitting for suits, the media night, the scramble for tickets, they can all have a huge bearing on your mental preparation if you don’t take control,” he says, referencing the 2004 final that Kilkenny lost to Cork. “It was everything you didn’t want it to be when I look back on the fortnight that built up to it. I didn’t realise all the things I was doing wrong – and they’re certainly not excuses – but they just add up. In 2004, there was an awful scramble for tickets. I got caught up in it at home. I had arguments with the mother over it. It’s stuff I’d like to have avoided.

“Kilkenny are very lucky in that they have experienced it a lot of times. They know how to get the system right. In the latter part of my career the tickets were dealt with the week before the week running up to the final. It was out of the way. Brian Cody would say: ‘Park it up. Let someone else look after the tickets. You need to have your head clear.’

“I remember [former Kerry football manager] Jack O’Connor had a term ‘people draining your bucket’. It can be people close to you. You know, just your friends ringing you talking about the match. You think sitting down talking on the phone is not necessarily draining but it actually is because you’re thinking maybe too in-depth.

“ You’re thinking in a guarded fashion. You don’t want to tell anything. It’s not a secret, but you don’t want to get drawn in. I remember getting treatment from [physical therapist] Ger Hartmann in 2010 and he said to me ‘that mobile phone is one of the biggest energy drainers in the run-up to a match’ and I’d have to agree.”

Pat Fleury, who won a couple of winners’ medals with Offaly in the 1980s as well as managing the county in the 2000 final, says it’s important to get the small things right on the day because the players are like coiled springs. “Everybody’s a bit on edge; everybody’s feeling nervous, some fellas more than others. As a manager you don’t want anything to happen that could upset a player. You want all the things to be 100 per cent or as close as you can get them. That’s why you spend so much time making sure everything is A1 beforehand.”

Brian Lohan kept sentry for the Clare hurlers in three All-Ireland hurling finals. Having won in 1995 and 1997, it was a case of third time unlucky when his county met Kilkenny in 2002. There were things that went awry in the build-up.

On the morning of the final his team were booked into a hotel in Dublin to unwind. The room he was to share with teammate Gerry Quinn was double-booked so the hour’s kip they were supposed to get didn’t happen.

Then the team arrived late to Croke Park so their warm-up was truncated. The coach driver took a wrong turn getting to the stadium.

“You know when you’re driving a bus in Dublin and you take a wrong turn it isn’t that easy to get out of it, especially a cul de sac close to Croke Park,” says Lohan. “It added a bit of disruption in our preparation.

“The thing about those things is that could have happened in ‘95 and you wouldn’t remember it because you won whereas if you lost you fall back on the things that didn’t go 100 per cent.”

Agony as Leitrim are denied victory at the death by Derry