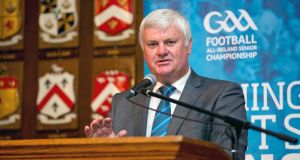 Aogán Farrell: his big pitch on the campaign trail was for clarity and due respect to finally be brought about for club players. Photograph: Inpho.

arises for Aogán Farrell to show backbone as GAA president, maybe an incident from back in 2008 will give a flavour of his likely response. The post office in Maudabawn, Co Cavan had been in operation since 1915 and along with an adjoining shop had been the family-run business of the Farrells for decades.

The future president of the GAA ran in and with the help of his son, Aogán junior, they tied the man up until the Garda arrived.

In court 18 months later, Farrell described the effect the incident had on his family.

The attempted robbery had directly led to the shop/post office being closed down. His elderly parents – his father was the former postmaster – lived upstairs and didn’t need this sort of trauma. His wife said she would not be in it on her own when there was money around. Another son, Conor, who was 11 at the time of the incident and had called 999, was badly shook by it all.

“There was no effect on me,” was his stolid response.

We can surmise that such ability to remain above the fray while at the same time involving himself when needed will serve Farrell well during his stint as the first ever Cavan president of the GAA. The 55-year-old from Drumgoon, deep in the twisted-road belly of Cavan, has taken about as traditional route to the presidency as any Ulsterman can.

Handball secretary in his club at the age of 14, club secretary in his early-20s, Irish officer to the county board soon after, Cavan rep on the Ulster council before the age of 30. He went on to be provincial PRO, treasurer, vice-president and eventually became president in 2010.

That team and the ones that followed flowed into the adult side that eventually won a junior county title in 2001. Later that year, they followed it up with a junior All-Ireland, beating Belmullet in the final, and went on to win the Cavan intermediate title the following year.

Every player on those teams passed through Farrell’s hands at some point, either in the club or the local Dernaskesh school of which he was the headmaster. Some people are pillars of their community – Farrell more or less was the community. Headmaster, postmaster, shopkeeper, he also set up a cultural centre in Maudabawn. Stone-walled and thatched, it sprung from nowhere to become a tourist attraction amid the drumlins and scutch-grass countryside.

Sometimes better known by his Irish name Aogán Ó Fearghail, Farrell is a fluent gaeilgeoir and historian. An excellent public speaker, he rarely works off notes and has often given talks on local history around Cavan.

Soft-spoken and all as he is, he proved himself to be flinty enough during his time as an administrator. He was president of the Ulster Council in 2011 when a Saturday night championship match between Armagh and Down clashed with the Champions League final between Manchester United and Barcelona.

While the Leinster Council moved quickly to switch the Wexford v Offaly game they had fixed for that night from 7.30pm to 5pm to avoid a hit on the attendance figure, the Ulster Council brooked no such compromise.

“Some people tell me when there is an omnibus edition of Eastenders attendances are affected,” Farrell sniffed. “The Russian ballet certainly affected attendances of a major sporting event in England that I was aware of. Do attendances get affected by television? Of course they do. But can we react to everything on TV? I don’t think so.”

In that light, it will be interesting in the coming months to take Farrell’s temperature on issues like the controversy around the Sky Sports deal. His big pitch on the campaign trail 12 months ago was for clarity and due respect to finally be brought about for club players so it is going to be fascinating to see what he thinks he can achieve in that area too.

It’s quite some years since we’ve come across a GAA president who hasn’t vowed to make things better for club players and yet time ticks on with nothing obvious having been done yet. With a rank and file sceptical as to just what a president can do to solve the most intractable quandary facing the GAA, it’s fair to say expectation is low.

But then, it was low in Drumgoon all those years ago too.