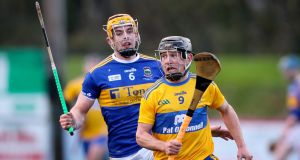 The Brian Lohan era in Clare got off to a winning start as they came from behind to defeat Tipperary in the opening round of the Munster Hurling League in Nenagh on Sunday.

The Banner county scored the last four points of the game in front of a crowd of just 830 to defeat the All Ireland champions.

“We got the last four scores which was good. The first thing you want is a bit of spirit and endeavour and we got that,” said the new Clare manager.

For Liam Sheedy, it was about getting back on the road for another campaign having started with just three of the side that began the All-Ireland final in August.

“We probably ran out of legs. I don’t think we scored the last ten minutes of the first half or the second half. We have done a little bit of work the last two weeks and we are a little bit behind the curve,” he said.

One of those three players was Jason Forde, who top scored with 14 points - five from play - in a marked contribution, with new faces Paul Flynn, Craig Morgan and Paddy Cadell showing well.

Both of Clare’s goals came in the first half from Ian Galvin and Seadna Morey while Tom Fox struck for Tipperary’s early in the second half. Tipp looked set to press on for victory until Clare’s late rally to take the two points in Group A.

Tipperary have little time to recover as they face Limerick in round two next Friday night.