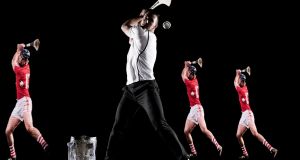 Bord Gáis Energy was formally announced on Thursday as the All-Ireland hurling championship’s seventh sponsorship partner since the GAA adopted the multi-sponsor model in 2008. The three-year deal is believed to be worth more than €1,000,000 a year.

Nine years ago the new model was introduced just before the financial crash and the fall of the national economy. Now retired, Dermot Power was the GAA commercial director when it was decided to switch the All-Ireland championships from single, title sponsors to the multi-sponsorship model associated with Uefa’s Champions League.

“The decision came,” he says, “in the wake of a marketing report and brand review, which had expressed concern about the GAA taking back the branding of the championship because particularly in hurling it had become very strongly associated with Guinness, the title sponsor since 1995.”

The transition worked surprisingly well and the All-Irelands became the ‘GAA’ championships and the three sponsors of the football and hurling also became a catalyst in clearing up what had become “a blizzard of brands” at championship venues.

Power accepts the GAA were fortunate in its timing in that they were able to secure a deal in early 2008 that wouldn’t have been available in the economic circumstances of two years later when the renewal was negotiated. For instance Toyota, one of the first sponsors, were badly affected by the bust and the resulting collapse of the car market.

“It was just one of those things. We facilitated their withdrawal. They had been great supporters over the years and were honourable people. You can’t be stupid about these things. If you have to put the squeeze on people by holding them to contract it’s not working properly. It’s a goodwill business.”

The recession had obvious impacts. On two occasions, sponsors had to be ‘found’. RTÉ Sport stepped in as hurling sponsors for the first two years to fill a gap and in 2014 GAAGO, the streaming service venture by the GAA and RTÉ, was one of the football sponsors for a year.

Etihad, the Abu Dhabi airline, finished up as a hurling sponsor this year and was the last of the original partners from 2008 to move away.

“Etihad were complete left fielders,” he says. “I think it’s worked very well for them. When I met them first I was completely unaware of them, as they were unknown in Ireland. It’s worked for them. If you’re looking to launch in the Irish market the GAA is a just about the best vehicle there is, as it gets you into every little hamlet in the country.

“But if you’re Etihad, you’re thinking, ‘do we really need to stay here much longer – we’ve probably got as much out of it as we’re going to get and we’ve put the brand into everyday language in Ireland’. That’s what sponsorship does; it doesn’t go on forever because different companies have different needs at different times but I still believe that the GAA is a wonderful vehicle for showing that you’re supporting the community.”

The most striking examples of the community potential are the retailers Centra and Super Valu, who have outlets all around the country and who have also become involved as high-street sellers of championship match tickets as part of bringing their sponsorship right into the heart of communities.

“Super Valu and Centra have done this brilliantly. Around the country you’re aware of their association with the championship. I’m down in Clare during the championship and, if they’re playing, it’s a big deal and the Super Valu in Milltown Malbay is selling tickets for it. That works extremely well when done like that.

“But if you have a sponsor who buys the rights and doesn’t use them then the value to the GAA is gone. I was always surprised Tesco never came on board because it would have been ideal for giving them the community positioning that Super Valu just own at the moment.”

Bord Gáis Energy have an established association with the GAA as sponsors of the under-21 hurling championship since 2009 and also the GAA Legends Tour series in Croke Park – guided by various well-known former players. The company also becomes the association’s Official Energy Partner.

The company is the second new sponsor of the hurling championship as Liberty Insurance’s three-year deal wasn’t renewed. Littlewoods, the online retailer, stepped in to the vacancy and took over sponsorship of the camogie league, as Littlewoods remained as sponsors of the camogie championship.

At the launch GAA president Aogán ó Fearghail said the GAA accounts for 2016 had disclosed that Central Council revenues were now being disbursed back to the units at a rate of 90 per cent. The figure in recent years had been just over 80 per cent.

Klopp says Lampard can succeed at a club with more patience 16:21
Pádraig Harrington says Ryder Cup must go ahead in September 14:43
Allaho could be Ryanair bound after assured win at Thurles 14:13
Tadhg Furlong could be fit for Ireland’s Six Nations opener against Wales 13:18
Arsenal sign Real Madrid’s Martin Odegaard on loan 12:12