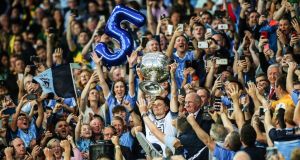 An All-Ireland football final six days before Christmas Day, with extra-time and penalties if needed, will conclude the revised 2020 GAA championship structures as announced by Croke Park on Friday.

As expected, the football championship will follow already agreed provincial competitions and will be straight knockout; the Munster and Leinster hurling championship will revert to an open draw, to be made live on Friday evening, with the old backdoor format to still apply.

As already agreed, the club championship window is to last 11 weeks, ending on October 11th. Intercounty training can only resume on September 14th, before intercounty competition resumes on October 17th, the first two weekends being taken up by the final two rounds of the Allianz Football League.

The opening round provincial football games will then start on October 31st, which means by the time the 2020 summer championship begins, the clocks will have already gone back for the wintertime. The All-Ireland final is then down for December 19th, six days before Christmas, and two days before the shortest day of the year, the hurling decider a week earlier, December 13th.

As for the remainder of the 2020 Allianz Hurling League, Clare have been declared winners of 1A and Limerick declared winners of 1B as both currently sit top of those divisions. If they are to meet in the championship at any stage then the 2020 league title may be awarded to the winners. If that is not to happen, the Allianz Hurling League title will be shared.

Roscommon will play London in the Connacht Senior Football Championship, pending confirmation of travel arrangements, but New York will not take part this year. All games will be decided on the day, up to and including even the All-Ireland final.

The question of having an entirely open draw was addressed at Friday morning’s press briefing in Croke Park, but it was decided the provincial format, with the five additional titles that came with it, was preferred. It was also agreed to conclude the championship within the calendar year to limit the impact on the 2021 season, and while there will be no defined penalties for intercounty teams who break the return to play dates, Croke Park will be observing the issue nonetheless.

“We’re not intending to,” said GAA president John Horan. “We’d like people to call them out but we’re not actually intending to impose any penalties, would that be fair to say.”

GAA Director General Tom Ryan added: “Today is about the fixtures programme and the calendar and what that might look like. The next step is looking at what safeguards that we put around that. But I think myself, the last three or four months, and the reason we’re at the stage we’re at is because the country as a whole and the Association has showed a great degree of restraint and personal responsibility. And that’s the thing we’d like to rely on first and foremost before we get into...it hasn’t been a summer for penalties and for sanctions and I’m not really sure that’s the right realm for this thing either.

“So what we’ll be looking for people to do first and foremost is...Feargal said it, all the stuff that Feargal has outlined here now, it’s something for us all to aim for and to hope to get to but we have to do an awful lot of things right in order for us to get to that stage and part of that is abiding by the timelines and principles that we’ve set out. We’ll be asking people to abide by those because they’re the right thing to do. If there’s a second stage required in terms of sanctions and penalties and so on, yeah of course we’ll look at that. But that’s not one for today.”

On the question of an open draw, GAA Head of Games administration Feargal McGill said: “We didn’t rule anything in or out when we sat down to do the fixtures. A couple of things though did occur to us while we were doing those, the first thing is if you play the provincial championships in football, you’re going to have four teams with silverware at the end of the year. In hurling, you’re going to have two teams as winners and possibly three if a different team wins an All-Ireland. So that was one of the reasons, you’re going to have five finals and at least four teams with silverware. Another reason was, you have to consider, what are you trying to solve in terms of having an open draw? Usually people will tell you, what you’re going to solve is avoiding cannon fodder for the big teams. But an open draw does not solve that, in fact it might add to it. So on balance, we felt the best approach was the provincial championships.

“The big thing is we’re keeping an eye on 2021 as well. So if you went into January, February with your championships, it causes mayhem for 2021. I suppose we wanted to minimise the damage, for want of a better word, that Covid has done to the GAA and done to our fixtures. It’s like pulling off a plaster, get it done as quickly as you can and try to get back to normal as soon as you can. We will be coming back obviously with a 2021 Master Fixtures Plan later in the year and I think it’ll make more sense then as to why we did what we did. We’re still probably going to have to compromise a bit around the 2021 calendar. But if you went into January and February, you have to build in a rest period after the All-Ireland finals are over. So really if you’re talking about playing an All-Ireland final in February you’re talking about not being able to restart until March or April and the knock-on effect of that would obviously be a negative one for clubs. So that was at the centre of our thinking as well.”

It also means the live draws for both the Munster and Leinster championships – the only provinces which have yet to complete their arrangements – will take place on RTÉ’s Six One News on Friday evening from the Leinster Council offices in in Portlaoise.

In hurling, both provinces have to re-draw the hurling championship, as there is no time for the round-robin format of the past two years. Munster will revert to the same draw as 2017, with no seeding, and the first two counties drawn will play the quarter-final. Leinster are to seed last year’s finalists (Wexford and Kilkenny). The province will also re-draw its football semi-finals.

Hurling counties will have two fixtures with the six teams who don’t reach a provincial final playing off and facing the beaten Leinster and Munster finalists in the All-Ireland quarter-finals.

The under-20 football championship will be played out as the All-Ireland semi-finals are ready to go and were supposed to be played on St Patrick’s Day. Decisions on venues will be decided at a later date pending updates on crowd capacities around Covid-19 restrictions.

The new arrangements for the intercounty competitions, after the recommendations of Central Competitions Control Committee (CCCC) as endorsed by Management Committee, also include the following details:

- Football Championship to revert to provincial knockout – New York will not be involved; London will be involved pending travel restrictions*

- Tailteann Cup to be postponed until 2021

- New draw to be made for Leinster and Munster SH Championships (draws to be made on Friday, June 26th)

- Participation of the Overseas Units from England in Ring, Rackard and Meagher Cups will have to be on the basis of all games being in Ireland (football and hurling); it is also based on no travel restrictions in place between Ireland and Britain.

Games in Provincial Championships will be week on week in many cases. Finish on the day (i.e. Extra Time, Penalties) to be introduced in all intercounty knock out games including, the All-Ireland Finals at all levels (Senior, U20, Minor etc).

Finish on the day for all intercounty competitions in 2020 will be: 2 x 10mins of extra time; if still level, straight to penalties (as per Central Council Regulations).

- Football League finals will not be played

- Finals in Division 2 and 3 Hurling only to be completed

- Division One Hurling League quarter, semi and finals will not be played – Limerick are declared Division 1a and Clare Division 1b champions for 2020.

- Under- 20 Football semis and final to be completed

No All Ireland Quarter Finals in Minor Football or Hurling *

One All-Ireland semi-final in Hurling – Draw has been made in advance: Galway will play Munster Champions *

CCCC recommends that competitions should be completed to provincial final stage only. No All Ireland Series at any level.

Without New York (v Galway); London v Roscommon to go ahead, pending the confirmation of travel arrangements by the London team.

Here is your handy guide to sport on television this week 17:01
Trezeguet double against Palace boosts Aston Villa’s survival hopes 16:48
Lewis Hamilton puts in dominating drive to claim Styrian Grand Prix 16:25
‘Jack used to call me his official grasshopper keeper. We had a great time’ 16:26
Leeds march on thanks to late Pablo Hernandez winner 15:50