A tour of Páirc Uí Chaoimh: The old ground in its best new clothes 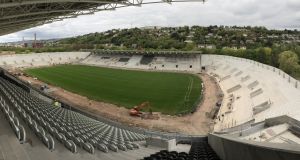 A view of Páirc Uí Chaoimh from overhead. Photo: Cork County Board

The printer on Bob Ryan’s desk zoom-click-zooms the day away. As we talk, it’s decanting a 109-page traffic plan for the environs of the new Páirc Uí Chaoimh, which today has around 500 workers beetling away under the early May sun.

“Who is going to read all that?” you ask idly, not even really looking for an answer. “Don’t worry,” smiles Ryan, the chairman of the stadium steering committee. “If something goes wrong, plenty will want to read it.”

They’re nearing the end. The old bowl down by the Lee has been replaced by a new bowl down by the Lee and, though it looks to be in a fairly raw state today, Ryan is adamant that it will be ready for the handover in four weeks. On the third Sunday in June, building contractors Sisk will officially turn the stadium over to the Cork county board and if everything has gone to plan, the first intercounty game will be the Munster football final on July 2nd.

“Hopefully,” says Ryan. “That’s the plan, anyway. We’d hope to have a few games here this summer. But it all comes down to the vagaries of sport, too. Like, if Tipperary beat Cork in the Munster football championship in June, that will mean no Munster final. Sport is sport at the back of it all, no matter what you’ve built.

Ryan points The Irish Times in the direction of a pile of boots, vests and hard hats on the corner of his portacabin and we set off for a tour. From a design point of view, the new Páirc Uí Chaoimh can best be described as the old Páirc Uí Chaoimh in its best new clothes. It’s as though the old one spent two years with a personal shopper and an army of makeover artists. It’s the old stadium, brand new.

Everyone who ever went to the old Páirc Uí Chaoimh, even if they bled the Corkiest red, knew and admitted that it was a desperate kip. But the one thing it had going for it was the sunken bowl effect of having steep terracing at both ends and stands on both sides. That, along with a couple of beams on the terracing at the city end, is the one thing that has survived the rebuild.

The terraces at the City End and the Blackrock End both hold around 12,000. The impressive three-tiered South Stand will house 13,000 while the smaller North Stand will take 8,000. All in all, that makes a capacity of in or around 45,000. For concerts, that will rise to around 48,000. To the obvious question of why not have 13,000-seater stands on both sides, Ryan gives an equally obvious answer.

“Sure we’d love to have done two stands of that size but we couldn’t afford it, simple as that. That’s a huge building, the South Stand. And actually I don’t think there’d be any need for it to be bigger overall, really. I think 45,000 is the right size.”

The final bill is expected to come in just a shade below €80m. The original target figure was €70m but that was back mid-recession and, among other factors, costs have surfed the rising tide of the construction industry in the years since. A combination of grants from the government, Croke Park and the Munster Council – as well as €10m from the Cork county board itself – has made up the funding so far, with the intention that a shortfall of around €13m will be made up through the sale of 2,100 premium level seats.

Those seats went on sale last November, with 10-year tickets coming in at a cost of €6,500. Precise numbers have proved elusive but the Cork county board’s official position is that sales are healthy – not that they would say otherwise, obviously enough. That said, naming rights are up for offer but even if and when a deal is struck on that front, it is unlikely that the original aim of opening the stadium debt-free next month will be met.

“The money, we’ll see in the end how it works out,” says Ryan. “You’ll always spend a bit more than what you expect to. We have built it to the highest possible spec, we haven’t taken any short cuts because I think you have to be prepared to see the bigger picture. Everything is done to a very high standard.

“The plan is for the premium tickets to pay for it into the future. Our commitment to the county and the association was that it wouldn’t affect the playing of our games. We have our challenges but we will deal with them and we will get it over the line – and in a short enough time too. I’d be hopeful.”

Over the term of the build, some parts of the original plan had to be scaled back, others changed as circumstances demanded. Most obviously, a mooted centre of excellence became a 4G all-weather pitch in front of the main entrance to the South Stand. They had to go to Europe for the roofs of the stands, which hadn’t been their intention from the outset.

“We failed to get anybody in Ireland to build the roof,” says Ryan. “A roof that size would take up a lot of workshop space. So we got a company from Austria to do it. They specialise in stadium roofs and they built it and brought it in and assembled it out the back there where the all-weather pitch is. They lifted it up in sections – each section weighed 70 tonnes. It’s a cantilever roof, held up by pillars on the inside and outside.

Ryan has seen the evolution of the Páirc from the days when it was the old Cork Athletic grounds. As a schoolboy, he remembers getting changed in decrepit old dressing rooms down in the far corner. “You’d have fellas stamping their feet on the roof above and shit would be falling down out of the rafters on top of you,” he says. To see it go from there to where it will be in a month has been a lifetime’s trip.

The mod cons are everywhere. LED lighting in the concourses and for the floodlights. A deal with Vodafone to provide free Wifi throughout the stadium. A fibre-optic hub to facilitate everything from big screens to electronic scoreboards to Hawkeye. On the playing side there is a more basic innovation – two tunnels in the South Stand – so that teams can come out and go in separately. “We had a bad experience in Thurles one time,” cracks Ryan.

And in the middle, the pitch is the same size as it ever was. They relaid it last October and the only hiccup so far with it has been the dry spring. In, of all places, poor old flood-ridden Cork, they’ve been short of the usual help from above. As a result, the ground is noticeably hard underfoot as you walk across the pitch.

“Grass is a bit long at the minute,” says Ryan as we cross midfield from North Stand to South. “If you can believe it, we’re protecting it against a lack of water at the minute. There’s a sprinkler system but a bit of water from the sky would go a long way. When you look out across the pitch you can see the pitch is sparse where the drainage system goes across. That’s because there hasn’t been the rain. When it comes, that will grow over.”

He’s not worried. He has a to-do list the length of the Lee and panicking about a lack of rain isn’t anywhere on it. They will be ready to go next month, with a stadium that they and all of Cork will show off as only they can.

The main concern within the county now is raising the level of the hurling and football teams to entice people into it. But then, if you can transform the eyesore that was the old Páirc Uí Chaoimh, anything’s possible.

Dean George bags a hat-trick as Athlone stun Shels 19:27
England lay down marker for Ireland after bonus point win in Rome 19:09
Dublin return from the dead to give Kilkenny a scare in Croke Park thriller 18:57
James McClean nets for Stoke as they beat Rotherham 18:35
Impressive Waterford power past Cork to reach Munster final 18:20