Manager met players at weekend, and is due to discuss plans for 2018 with county chair 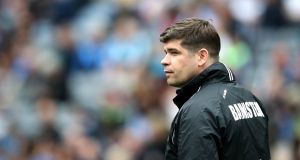 Kerry manager Eamonn Fitzmaurice: an official announcement from Kerry GAA is expected this week to confirm that he is remaining. Photograph: Ryan Byrne/Inpho

Éamonn Fitzmaurice ended speculation on whether he was going to see out the final year of his term as Kerry football manager in the wake of Kerry’s disappointing display in the All-Ireland semi-final defeat by Mayo when he met some 40 players at the Brehon Hotel, Killarney, on Sunday evening.

An official announcement from Kerry GAA is expected this week to confirm that Fitzmaurice is remaining. This had been expected since Kerry chairman Tim Murphy endorsed him at September’s county committee meeting, at which there were no negative comments about the manager.

Rumours about certain individuals stepping away have also proved to be unfounded as it is believed that his selectors will remain – they include Mikey Sheehy, Maurice Fitzgerald and Liam Hassett.

Sheehy and Hassett were seen sitting together on Saturday at Austin Stack Park watching a county championship quarter-finals’ double header.

There may be changes elsewhere in the backroom team, and Murphy is due to meet Fitzmaurice this week to finalise plans for 2018.

Murphy told the county committee meeting that Kerry supporters need to be patient. “People need to allow the management team a bit of latitude over the next while to bring the undoubted talent that we have at under-age level through to senior level. It doesn’t happen by waving a magic wand, and I think there is time required.”

Kerry have won a record fourth successive All-Ireland minor title, drawing further attention to the extravagant talents of David Clifford, who scored 4-4 in the final defeat of Derry. Next year’s under-20 manager Jack O’Connor has already accepted that the player will be fast-tracked into the senior panel.

Meanwhile, Cork are in a position to move quickly on the vacancy in their hurling management as the county executive and committee are due to meet on Wednesday.

Kieran Kingston’s decision to step down was announced at the weekend, and although it had taken a while to be confirmed, there had been concerns in the aftermath of the All-Ireland semi-final defeat by Waterford that the manager, who had also previously served as the county’s coach, might decide to call it a day after two years of management.

A busy career, which entails travel abroad, has been cited as the main contributing factor. Another selector, Pat Hartnett, had already announced his own departure, also for work-related reasons.

Cork filled a similar vacancy in the senior footballers by appointing a sub-committee of the executive to make the recommendation before Ronan McCarthy was appointed, and it is likely the same approach will be deployed on this occasion.

It is considered likely that the new appointment will come from among the outgoing management group, with coach Pat Ryan and selector John Meyler seen as the front runners.

Meyler managed the county under-21s this summer, and has worked with most of the players in the course of his involvement with development squads.