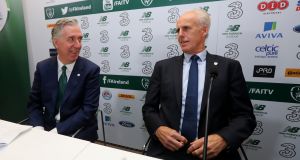 The spectre of John Delaney over the FAI might be fading more and more by the day since his departure from the organisation last year but it was thrown back into full light over the weekend with the departure of Mick McCarthy. Despite the fact that, contrary to what FAI interim CEO Gary Owens said on the radio, McCarthy did not get Ireland to the Euro 2020 playoffs and that spot instead came about via finishing bottom of our Nations League group, the departed manager is still contractually entitled to a €1.5 million payoff and a potential further €1 million should Ireland reach the tournament. This morning Emmet Malone writes that “it is hard to imagine what Delaney was thinking of. Other than himself, of course.”

In rugby, Gerry Thornley writes in his column this morning that the enforced global pause caused by coronavirus could allow rugby to tidy up the area that has seen so much debate – the breakdown. “Whenever rugby does return, it may well look a little different, and hopefully more stringently officiated and safer for players in the longer run,” he writes. Meanwhile, proposals for a new rugby Club World Cup appear to be fanciful at best, despite the ECPR confirming last night that official talks have already taken place. “Although Laporte is an ambitious, high-achieving heavyweight player in rugby’s global politics his radical proposal for a World Club Cup has to be viewed in the context of his imminent bid to become to become the vice-chairman of World Rugby,” writes Gerry Thornley.