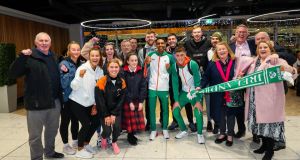 Efrem Gidey with his bronze medal from the Men’s U20 race and members of his club Clonliffe Harriers at the Team Ireland homecoming from the European Cross Country Championships. Photo: Ryan Byrne/Inpho

When the news came last week that the FAI was in debt to the tune of €55 million and the extent of the association’s problems were laid bare, the questions turned to how many jobs could be lost. Various numbers have been floating around over the last few days with suggestions that the figure could be 60 if Ireland don’t qualify for next year’s Euro 2020 Championships. To put that in context – a large number of people’s livelihoods may be resting on Ireland winning two matches away from home over the space of five days. It’s far from a desirable position to be in and Emmet Malone reports this morning that the union representing many of the FAI’s staff hopes to meet with management over the coming days to get some clarity on what that figure actually is. Meetings have already been held with staff but have led to frustration as management failed to disclose exact details. On the same subject this morning, Jack Horgan-Jones reports that one of the associations main sponsors – SSE Airtricity – are to meet with officials this week to discuss their concerns.

Moving to rugby now and Gerry Thornley writes in his column this morning that the Irish halfback situation – once set in stone – is now not so certain. “As things stand, both Sexton and Carbery are sidelined and, albeit this far out, appear to be significant doubts for the start of the Six Nations. So what would happen then?” he writes. Yesterday, Robin McBryde gave his first interview since taking over as Leinster’s scrum coach. “There’s a bit of pressure, but I’m here to perform as well. I’m conscious of that; I can’t be in the background all the time. I’ve to step into the breach and take some responsibility and ownership. I’m just introducing them to different ways of thinking, different ways of coaching,” said current Grand Sword Bearer of the Gorsedd of British and Irish bards.

1 State subsidises public sector retirees to cover gap until State pension
2 Rob Delaney: ‘As my career took off, my son got sick...then he died’
3 Who are Ireland’s 17 billionaires?
4 Ipsos MRBI poll: Fianna Fáil edges ahead of FG as SF surges
5 Fintan O'Toole: Safety-first politics has had its day
6 52 places to go in 2020: Here’s where the New York Times says you should visit
7 Gardaí suspect botched murder attempt was bid to avenge Mulready-Woods death
8 Fianna Fáil will be happy, Sinn Féin thrilled but keep an eye on the Greens
9 My father in a nursing home wants to gift me his house
10 Gerry Thornley: Saracens very late to apologise for repeated cheating
11 So here I am, clutching my Happy Pear cookbook and crying into my dhal
12 Immune cell discovery could treat ‘wide range of cancers’
13 Clothing and footwear seized in Cameron Blair murder inquiry
14 Trump holds America up as ‘example for the world’
15 Netflix: The best 101 films to watch right now
16 Seven reasons to watch Paris Hilton’s new cooking show
17 Girl settles case over head getting trapped in electric gates for €20,000
18 M50 tolls payment case against Keane Mulready-Woods withdrawn
19 Election 2020: Dublin Rathdown constituency profile
20 Don’t refer to them as ‘the ‘Polish child’ or ‘the Chinese child’ – learn their name and use it
21 Election 2020: ‘We all think the health service is a lost cause’
22 Social Democrats to ‘radically scale up’ number of new homes
23 Election 2020: Tipperary constituency profile
24 Schoolboy gets four-year suspended sentence for attack on delivery man
25 Countries that fail to attract immigrants will lose out – Microsoft chief
26 Felix Jones expects De Allende and Snyman to boost Munster
27 War of Independence discovery reveals IRA spy network
28 Johnson suffers parliament defeat as Coveney outlines trade priorities
29 Dublin City Council throws out Iveagh Markets application
30 Nóra Quoirin’s family sue resort owner and call for inquest
31 Ken Early: Solskjaer’s short-term gambles proving very costly for United
32 Election 2020: All you need to know about the upcoming general election
33 Election 2020 outtakes: McHugh’s as tough as nails
34 Are there annual limits on inheritances or gifts to a child?
35 Could coronavirus become a Sars-like illness?
36 Election 2020: Dublin Bay North constituency profile
37 As the UK tightens gambling laws Ireland still lags way behind
38 Gardaí investigating Keane Mulready-Woods murder arrest man
39 Cubic Telecom raises more than €11 million in funding
40 Prince Harry arrives in Canada to begin new chapter with family
Real news has value SUBSCRIBE