Keith Duggan: Night to remember on green field of France 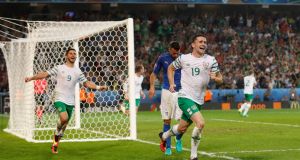 La vita é bella. The greening of France was completed last night when Robbie Brady stepped into Irish sporting folklore on a transcendent night for the national football team. On a riveting occasion in Lille, Martin O’Neill’s team won when nothing less would do to set up a second-round game against France in Lyon on Sunday.

This night will go down when the kids held spellbound by Ireland-Italy 1994 created their own searing moment for the next generation to relive this evening and the next, in the park and on the streets.

“We played some phenomenal stuff,” said O’Neill late on last night, sounding exhausted and proud. “I didn’t want it to be one of those nights of ‘if onlys’.”

Football: bloody hell. About an hour before kick-off, O’Neill’s starting 11 filtered into the muggy Flanders evening. It was as intriguing a selection as he has ever plumped for.

The regular back line deconstructed apart from Séamus Coleman, who lived his role as captain with furious intensity. Glenn Whelan dropped, big Daryl Murphy up front with Shane Long. James McCarthy, the player savaged night after night on RTÉ was elevated to midfield leadership and James McClean started. No Wes Hoolahan.

It was anyone’s guess whether the team would work. And for 45 minutes, this newly composed unit gave the most thrilling and persuasive football performance of the O’Neill chapter. From Coleman’s bone-jolting tackle on Mattia De Sciglio in the first minute, Ireland set an uncompromising tone. McClean and McCarthy harassed and tackled and stepped into the Italian’s passing path and McClean turned Andrea Barzagli and Stefano Sturaro inside out with an audacious is slightly blindfolded 37th-minute dribble towards glory. Something about the pure boldness of his attitude suggested contained the promise that something magical and unforgettable might be plundered from Lille. Jeff Hendrick assured line of form continued and he highlighted his rising stock with a beautifully struck shot with came close to perfection. 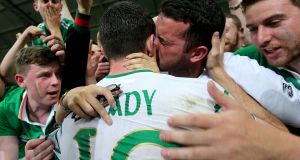 Murphy also came close with a powerful header tipped over by Salvatore Sirigu but the gilt-edge Irish chance came in the 44th minute when McClean, inside the Italian penalty area and ready to pull the trigger on Murphy’s lay-off was mugged in broad daylight by Federico Bernardeschi. Referee Ovidiu Hategan was the only person in the stadium who believed McClean wasn’t fouled.

The Italian defence had been roughhousing Shane Duffy and Murphy on every set piece but this foul was naked in its intention. It was such a scandalous non-call that it was evocative of the fabled internationals in the old Eastern Bloc when visiting teams were subjected to baffling officiating. O’Neill’s face was a picture of fury and Coleman held Hategan in conversation at the half-time whistle.

Ireland’s show of total football continued through the second half. The Italians were abject: Giovanni Trapattoni must have been watching from behind the sofa at the ineptitude and clownishness of their passing through Ireland’s pressure. It was strange to witness: an Irish team composing considered build-up after build-up against the European aristocrats.

The Irish boys were beginning to tire. Robbie Keane appeared from the substitute’s bench. Last throw: old times. Then, all of a sudden Wes Hoolahan was through one-on-one. And yes: a nation held its breath. The shot bounced off Sirigu’s legs and the chance disappeared.

And even as thousands of us figured that was it: dream over but at least the exit would be glorious, there was Wes again, cutting inside and seeing the possibilities a bit clearer and sooner than everyone else, curling a delicious in-swinging ball. Robbie Brady’s headed connection was bullet fast and perfect. 1-0. That sound – deafening and electric – felt like a psychic link to the heroics back at USA 94.

The crowd was locked in now: at once baleful and overjoyed and disbelieving.

“An enormous support kept us going and I think the players and fans fed off each other,” said O’Neill. “It became rather emotional at the end but they deserved to win.”

So five minutes before they would have crashed out, this Ireland team became the first ever to progress in the European Championships. They are brave to a fault. It is no secret that France has fallen in love with the raucous, singing Irish carnival. That may change if Ireland can tap into this kind of mood again.

Republic of Ireland move up in Fifa World Rankings

Uefa to stick with 24-team format in European Championships

Eder no accidental hero for Portugal

Your Comments
Sign In Sign Out
We reserve the right to remove any content at any time from this Community, including without limitation if it violates the Community Standards. We ask that you report content that you in good faith believe violates the above rules by clicking the Flag link next to the offending comment or by filling out this form. New comments are only accepted for 3 days from the date of publication.
Euro 2016