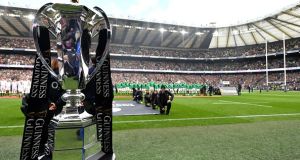 England could be without some of their key players when they complete the Six Nations in October. File photograph: Getty Images

Andrew Johnston has withdrawn from the European Tour’s British Masters following just nine holes, citing unease over the post-lockdown environment. “I’m struggling to get my head around it all,” Johnston said. “One minute I’m coming out of lockdown, going out for dinner, and then the next I’m back in lockdown in a hotel room.” At 11 under par, the Italian Renato Paratore holds the 36-hole lead. Jonathan Caldwell is the best of the Irish quartet in action as he got over a poor start involving back-to-back bogeys to card a two-under 69. It moved the Bangor golfer to six under for the tournament, five off the lead. At the PGA Tour’s 3M Open in Minnesota, Seamus Power’s opening round score of three-under 68 is three off the lead.

England could be missing a host of frontline stars when they go in pursuit of the Six Nations title in October following confirmation that Premiership clubs will keep hold of their players for the domestic final. England top the Six Nations table on points difference from France, though Ireland would go into first place with a bonus-point victory against Italy. That match is set to take place on October 24th, a week before the final round when, as well as England’s trip to Italy, France host Ireland and Wales face Scotland. In the latest entry to his Covid-19 lockdown diary, Leinster and Ireland prop Andrew Porter is looking forward to getting down and dirty with his scrum buddies again: “A different mindset is required. It’s hard to explain. We’re a different breed. The confrontational element is brilliant, mentally as well as physically. It’s being able to use your body for what it was made for.”