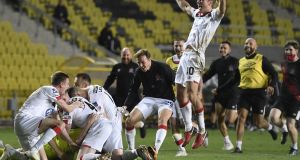 Dundalk are one game away from repeating their feat of 2016-17 and qualifying for the Europa League group stages, after their penalty shootout win over Moldova’s Sheriff Tiraspol last night. Filippo Giovagnoli’s side went a goal down early on but equalised through Seán Murray on the stroke of half-time. After a goalless second half the game went to extra-time and then a shootout, with the Lilywhites scoring all five of their penalties and Gary Rogers making a crucial save. Dundalk’s reward is €300,000 and a further qualifier against Klaksvikar Itrottarfelag of the Faroe Islands at the Aviva Stadium next Thursday, where a place in the group stages and €3 million will be at stake. Elsewhere in the League Cup last night Manchester City progressed to the fourth round after a 2-1 win over Bournemouth; Aston Villa won 3-0 at Bristol City and Liverpool thrashed Lincoln City 7-2. In the Uefa Super Cup European champions Bayern Munich beat Sevilla 2-1 after extra-time.

The 2020 Irish Open got underway yesterday with the marquee name in the field - British Open winner Shane Lowry - getting off to a slow start at Galgorm Castle. Lowry posted a five over par opening round of 75 at the Ballymena venue, meaning he is 10 strokes off the lead and facing a battle to make the cut. South Africa’s Dean Burmester set the early pace with a fine round of 65, while English duo Jordan Smith and Aaron Rai share the lead on five under par. Amateur James Sugrue leads the Irish challenge after his opening round of 67. You can follow all of today’s action via the Irish Times liveblog, with Lowry back underway at the later time of 1pm.