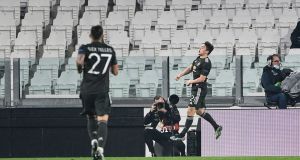 It’s another record for the Dublin footballers this morning as Dessie Farrell’s side equal the record nine All Stars haul of their predecessors in 1977 and Kerry in 1981. The balance is made up of players from Cavan, with three, Mayo, two, and one for Tipperary. For a full breakdown of the team you can read Seán Moran’s report. This year also marks the 50th anniversary of the GAA All Stars and this morning we look back on that very first ceremony which was devised by sports writers and sponsored by a tobacco company.

Moving to rugby and Gavin Cummiskey writes this morning that yesterday’s news of Lynne Cantwell being appointed South Africa’s women’s high performance director is very much their gain and the IRFU’s loss. “That Ireland’s most capped female (86) has been “lured” to the southern hemisphere in a “departmental rejigging” shows how highly regarded Cantwell is in rugby circles,” he writes. Elsewhere, Leo Cullen spoke yesterday on the concussion issue which continues to dominate rugby at the moment with the Leinster coach saying that it is at the forefront of everyone’s mind. Meanwhile, Andy Farrell appears somewhat reluctant to use next week’s Six Nations clash with Italy as an opportunity to blood some uncapped youngsters.

9 Fintan O’Toole: We had zero Covid and we blew it

15 Spring clean: 13 ways to spruce up your home – with or without a tradesperson

27 ‘We should have done better’: Cillian de Gascun, Paul Reid and Stephen Donnelly look back

30 Time in jail made a golfer of Notah

36 Steve McQueen: ‘Calling me a political director is like calling me a male director’

38 Thoroughly modern makeover on tucked away Ranelagh road for €950k