Donal Óg Cusack on hurling mission to the Americans 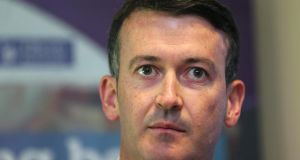 Donal Óg Cusack was at the launch in Croke Park of the Celtic Champions Classic, an 11-a-sIde hurling tournament to be played at the Notre Dame University campus in Indiana, USA , in October. Photograph: Lorraine O’Sullivan/Inpho

First rule of hurling is you do not talk about hurling. Donal Óg Cusack is determined to alter that notion by promoting the game away from these shores.

“I believe last Sunday was living, breathing poetry and why not show it off to the world?” the Gaelic Players Association chairman said yesterday.

“The GPA have a strategy for the US, with the support of the GAA, built around creating a stronger network of supporters and raising the profile of our games and our players and generating an income stream from the US.”

Cusack went before the top brass of the association recently with two ideas to expand hurling’s horizon.

One is the Freestyle Hurler campaign on YouTube. The other was announced yesterday in Croke Park with heavyweight support from Notre Dame University and Aer Lingus.

11-a-side
The Celtic Champions Classic will be an 11-aside hurling tournament on Notre Dame’s South Bend campus in Indiana, at the Lacrosse stadium on October 19th, just hours before The Fighting Irish face their “arch rivals” USC. In American Football, not hurling.

A Cusack stance or idea tends to create instant debate. (Some are still trying to get their head around the proposed change in colour of the sliotar to luminous yellow. Optometrist Valerie Kelly convinced us of the merits.)

The New York board turned down the chance to host a major hurling match this year. Instead they wanted dollars to do up Gaelic Park in the Bronx.

“But that’s a very good point; if you could bring big championship games, get them on the networks over there, and show it to people who have never seen the game before.”

The Jesuits undertook similar missions in the 16th and 17th centuries, scrambling over the Iguazu Falls to bring Christianity to the Guaraní natives.

Many a fine priest of the GAA will carry the load, but in Cusack, the GPA (The association’s Jesuit order) have their very own Rodrigo Mendoza.

Cusack is adamant the Celtic Champions Classic will not be exhibition hurling in the All Star touring mould.

“We were having country-wide trials but now we’ve split up into the Leinster conference and Munster conference. We’ll be announcing the managers in the next while . . . it’s all inter-county lads.”

The actual rules then:

No points, only goals
“You can strike as many times as you want in sequence but you can’t hand-pass more than once. No points, only goals. Goals are a different shape. There is a goal scoring zone. Inside of it, you get three points. If you score from outside of it, it’s five points. Doubling on the ball gets you an extra point.

“There is a time limit on, once you gain possession so you need to offload a shot in 30 seconds.”

It’s also proposed the 11- a-side format can act as a “testing ground” for new rules.

“Might work, mightn’t work. But at least you’re going to have a cut off it,” says Cusack.

“There will be a lot of people that day in Notre Dame that won’t have seen the game of hurling. Those who saw the game last Sunday were going away saying ‘Jesus, why haven’t we seen this game before’. It’s something special, something unique.”

‘This the game I have been telling you about,’ two-time Oscar winner Tom Hanks reportedly yelled across the Shannon airport bar to his two sons as the Galway and Limerick minors drew scimitars last month.

“There are 40 million Irish-Americans or people in America of Irish descent,” Cusack continued.

“Even if you got, in one season, 10 per cent more of those people watching the games, wouldn’t that be some target to aim for?”

‘Missionary spirit’
“Hurling is a game that needs to be promoted,” said GAA president Liam O’Neill. “The sort of missionary spirit that you hear every time Donal Óg opens his mouth is really impressive, isn’t it?
“He came up with this concept, came to us with it and we said let’s try it out. What’s the worst that can happen?”