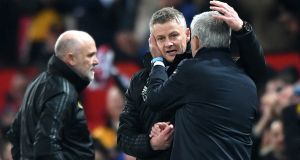 It’s over six weeks since Ireland’s disastrous failure at the Rugby World Cup and we now look to be getting a clearer picture of just what went wrong in Japan. The IRFU’s review into the campaign was revealed yesterday with performance director David Nucifora explaining to Gerry Thornley and other journalists that there were a number of mistakes made, most notably a failure to develop Ireland’s game, an overt focus on the opening pool match against Scotland while underestimating Japan and a failure to cope with the anxiety that increasingly afflicted staff and players from the Six Nations through to the tournament itself. The findings shine a harsh light on what was a hugely underwhelming performance from Ireland and former captain Rory Best has gone a further in his thoughts by saying that there was “too much detail and too much tension” and that a newly-adopted player-led approach was abandoned between the win over Scotland and the defeat to Japan. Now retired, Best perhaps felt he could speak a bit more freely yesterday and he did exactly that. Meanwhile, in his stats column this morning, John O’Sullivan looks at the impact Ireland under-20s are making at senior level with the Celtic Cup and All-Ireland League proving to be perfect breeding grounds.

On to soccer and there was more misery for Everton last night as they succumbed to a 5-2 defeat at the hands of a relentless Liverpool side who made it 43 points from a possible 45 in their first 15 matches. On a dramatic night in Anfield the visitors threatened to fight back a number of times but Liverpool always had too much and the defeat now leaves Marco Silva’s job hanging by a string. Indeed the Portuguese manager looks set to be sacked as early as today with Everton, who are now in the relegation zone, lining up a return for former manager David Moyes. At the King Power Stadium Leicester maintained their pursuit of Liverpool with a 2-0 win over Watford in what was a seventh consecutive victory. Meanwhile, at Old Trafford, there were no happy returns for José Mourinho as he saw his Tottenham side succumb to an impressive Manchester United performance as Marcus Rashford netted twice to secure a 2-1 win and send Ole Gunnar Solskjaer’s side above Spurs and in to sixth place.