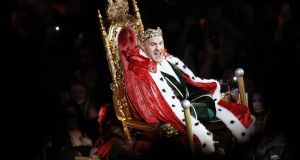 The morning after Tyson Fury humbled Deontay Wilder, Donald Trump praised the fight and floated the idea of inviting both boxers to the White House.

Certainly, a close encounter with Fury, an avowed fan of the president, would be a meeting of similar minds, a pair of unabashed troglodytes over-fond of spouting outlandish conspiracy theories, clinging to outmoded sexist views of the world, and always revelling in every opportunity to deliver offensive put-downs. Not to mention they share a predilection for cheating, one with performance-enhancing drugs, the other with women who are not his third wife.

What better way to introduce the loquacious Englishman to a wider American audience than a gurning photo opportunity in the Oval Office? A love-in of haters, if you like. Imagine how well Fury’s pseudo-biblical schtick will play among the fundamentalist Christians with a blind spot for Trump’s every transgression.

Picture the scenes in their mega churches across the deep south when those in the stadium seating hear that the heavyweight champion has compared homosexuality to paedophilia and claimed that the legalisation of gay rights is one of three signs that the apocalypse is nigh. For them lads, that’s some rapture-level rhetoric right there.

Of course, large chunks of that particular constituency may already know Fury from his lucrative, plodding cameos on WWE, where he earned an estimated $15 million (€13.8 million) for performances that were, even by the standards of that putrid pantomime, spectacularly mediocre and poorly acted.

Still, it says much for how ghettoised boxing remains because of its reliance on pay-per-view in these parts that far more Americans might recognise his face from wrestling’s carnival of the grotesque rather than the two fights with Deontay Wilder (far from a household name even in his home country).

The giddier corners of the British press may be talking up the putative return of the heavyweight division to something akin to a golden age but they are missing a crucial point. Boxing surrendered its place in the mainstream media here many years ago and is unlikely to ever regain that status.

Floyd Mayweather Jnr is the greatest boxer of this generation, yet to the average Joe and Josephine in the midwest, he’ll always be the diminutive bald guy that was on Dancing with the Stars for a couple of episodes back in the day. They know more about his questionable paso doble than his mesmerising punches.

There is a school of thought that Fury might just be the outsized personality to give boxing real traction and make casual viewers take notice again. Perhaps. Even if last Saturday’s bout was purchased in just over 1.5 million homes, the lusty “American Pie” rendition in the ring will have amplified his celebrity very quickly.

The late night chat show bookers probably haven’t been in this much of a frenzy to snare an athlete since they first heard Conor McGregor do his madcap paddywhack braggadocio bit in the first flush of his fame. That any Fury appearance on network television might come with the whiff of cordite in the air only adds to his box office allure.

In an entertainment business largely driven by the viral potential of interviews (witness James Corden’s “Carpool Karoake” business model), they’ll just need Fury to break into one of his well-worn riffs about the coming legalisation of bestiality or the Zionist bankers controlling the world to drive the online numbers up.

Of course, the boxer and his entourage will claim that won’t happen, he’s a reformed character and his, ahem, unfortunate tendencies to peddle guff from “The Protocols of the Elders of Zion” are no more. The new Fury, they assure us, is singing a redemption song about his brave battle with mental illness, offering hope to sufferers everywhere. While wearing the dreaded MTK logo on his t-shirts.

Most Americans will see MTK and presume it’s the abbreviation for the surfing mecca of Montauk, not the name of a management company established by a notorious Irish criminal who has caused quite a few mental and physical problems for his many, many victims.

Despite their protestations to the contrary, and the fact that Kinahan is no longer involved, current MTK president Bob Yalen has been effusive in his praise of  his role in establishing the organisation.

Most of those inside professional boxing who know about Kinahan’s role as founder probably don’t care because, in their minds, this is a sport which, for decades, was awash with mob money and nefarious influence.

Associating with an enterprise like that should be a bigger deal but isn’t, won’t be and almost definitely will not impact on Fury’s potential to cash in on his victory. If he’s interested, there’s easy money to be made here because sports marketing today operates on the Kardashian principle. It doesn’t matter why you are famous or for what you are best known, as long as you are.

Reebok launched a new shoe recently and have McGregor, who reasonable people might assume should be a tad radioactive for endorsements at the moment, fronting their advertising campaign. Which explains why there are probably Madison Avenue suits right now casually dismissing Fury’s back catalogue, his greatest homophobic, sexist and anti-Semitic hits, as irrelevant while they busily script commercials where he hilariously murders some classic tune.

Truly, a heavyweight champion Trump will be proud to know.