Cross-channel racing traffic a welcome sight in Galway; No plans to scrap scrums 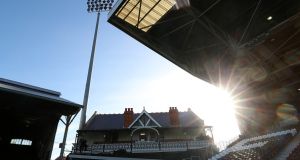 The pair of English-trained horses set to line up for today’s Guinness Galway Hurdle almost feels reassuring in the current climate. Both Olly Murphy’s Hunters Call and the Dan Skelton-trained Fair Mountain will take their chances in this evening’s Ballybrit feature despite complicated travel arrangements due to coronavirus restrictions. Read Brian O’Connor’s preview of Thursday’s action here. Early Doors supplied owner JP McManus with a seventh success in the Tote Galway Plate on Wednesday evening, while Mohaather produced an irresistible burst of acceleration from a seemingly impossible position to beat the Guineas winners from England and Ireland in the Group One Sussex Stakes at Goodwood.

Despite developments in the UK, there are no suggestions, as yet, from either the Irish government or the IRFU to scrap scrums when the club game resumes in early September. A report in the Guardian has indicated there may be no scrums in “recreational rugby union” in the UK until after Christmas. Also in this morning’s rugby pages, Louise Lawless asks why can’t we buy an Ireland women’s rugby jersey? “Until the players look out to the stands at Donnybrook, Murrayfield or Twickenham and see Aon jerseys, until potential sponsors can see it as a worthy investment, and until fans can buy a jersey without it becoming a question of the worthiness of women’s sport, the Irish women’s rugby team will remain a “Team of Them” and the men the “Team of Us”.”

1 Midlands lockdown: ‘Why shut down Offaly and leave Dublin open?’
2 Regulations allowing gardaí enforce restrictions in Kildare, Offaly and Laois signed into law
3 Meet the Bearman of Buncrana: ‘I knew about Joe Exotic for years’
4 Inside the dog-trafficking trade: ‘After drugs, it’s guns, then pups’
5 Sand-hued cyclepaths changing the face of south Dublin coast
6 Harry McGee: We are seeing the return of Straight-Talking Leo
7 Irish in Australia: ‘We are in for a few hard years’
8 Meat plant clusters may be down to softly-softly approach
9 German nudist chases wild boar that stole laptop at Berlin lake
10 Midlands lockdown: Movement restrictions in place for residents of Kildare, Laois and Offaly
11 All eyes on Tenet, the spy movie with everything to prove
12 Caroline O’Donoghue: ‘There is a real anger in Irish millennials’
13 Frustration for Lowry and McIlroy as Li leads at US PGA
14 Cars to give way for Sandymount cycle path
15 David McWilliams: John Hume understood the power of credit
16 Mauritius faces environmental crisis as oil spills from grounded ship
17 Ross O’Carroll-Kelly: ‘We could be in DeVille’s among people who get where we’re coming from. Literally the Vico Road’
18 Masks Q&A: Who has to wear them in shops and what happens if you don’t?
19 British cash for Northern Ireland shows scale of Brexit disruption
20 Main points: What restrictions have been imposed on Kildare, Offaly and Laois?
21 Cliff Taylor: As we reawaken the economy, we find Sleeping Beauty has a hangover
22 Tanya Sweeney: You get a lot of brain space back when you stop hating your body
23 Pat Hume: The woman who never gave up
24 Scarlet for ya: Paul Mescal does classic Connell in The Rolling Stones’ new video
25 Escape to west Cork: Majestic views, spectacular food and a warm welcome
26 Trump vows to suspend payroll tax as coronavirus aid talks break down
27 ‘Deep and urgent threat’: Martin defends midlands lockdown
28 How a ship abandoned by its owner brought deadly cargo to Beirut
29 Ireland's 'R number' of almost 2 a 'serious concern' as number of new cases jumps
30 Juventus to ‘evaluate everything’ after European Cup exit
31 Second Midlands GAA club shuts down activity after outbreak among players
32 ‘Draconian’: TDs from across Midlands shocked and angered over lockdown
33 Pandemic problems: Experts answer your queries on sex, parenting and relationships
34 Have young people stopped following Covid-19 advice on travel and parties?
35 What’s the story with dining out under new Covid-19 regulations?
36 Michael Walker: Pressure mounts on Barcelona to stop slide
37 ‘Saudi Arabia is where the opportunities will happen in future’
38 Catholic Church faces challenges as places of worship reopen
39 Was Caroline Flack ‘hounded’ to death by tabloid media or us?
40 Dublin Fringe Festival 2020: Making lemonade in a year of lemons
Real news has value SUBSCRIBE