Coronavirus hits Arsenal and Chelsea; The Players Championship is cancelled 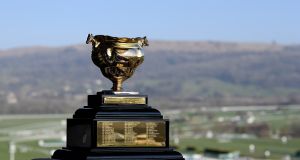 It’s Cheltenham Gold Cup day, and it’s one of the most wide open races we’ve had in years. Photograph: Getty Images

As of today all horse racing in Ireland has been closed to the public until March 29th, but across the Irish sea Cheltenham goes ahead as planned. And it’s Gold Cup day. You can follow our live blog of the action from 12.45pm and check out Tony Keenan’s day four tips here. Al Boum Photo could join former Cheltenham Gold Cup legend Best Mate in winning steeplechasing’s ‘Blue Riband’ back-to-back, read Brian O’Connor’s preview here. While in an unusual twist of fate, JP McManus’s jockey Mark Walsh could win the sport’s ultimate prize for Ryanair chief executive Michael O’Leary. On Thursday, Gordon Elliott brought his festival tally to six wins for the week with a day three hat-trick, as the Stayers Hurdle turned into a bookmakers benefit with the Welsh trained 50-1 shot Lisnagar Oscar holding on for an unlikely win.

The PGA Tour’s Players Championship at Sawgrass has been cancelled after the first round on Thursday owing to the coronavirus. Organisers had planned to play the last three rounds without spectators, but a decision was later taken to abandon the tournament, as well as the next three weeks of PGA Tour events. Rory McIlroy had expressed his serious concerns prior to the announcement.

1 Coronavirus: Varadkar returns to practising medicine to help during crisis
2 Donald Trump’s clown car administration has put the fear in all of us
3 Restarting Ireland: When and how will we ‘get back to normal’?
4 Coronavirus: Boris Johnson in hospital for tests as symptoms persist
5 Robbie Lawlor profile: A feared criminal with a long list of enemies
6 Irish doctors on getting Covid-19: ‘In 90 minutes, I deteriorated quite rapidly’
7 Coronavirus: Plans to move 600 consultants into public system hit obstacle
8 Infected but feeling fine: the unwitting coronavirus spreaders
9 Dublin criminal Lawlor may have been shot dead by man who owed him money
10 Coronavirus: Co Tyrone couple buried together after dying 20 hours apart
11 What is Houseparty, the app everyone’s talking about – and not in a good way?
12 Fewer deaths in Veneto offer clues for fight against coronavirus
13 Coronavirus: Number of Irish cases nears 5,000 as 21 further deaths confirmed
14 Tuberculosis vaccine ‘potential game-changer’ in Covid-19 fight
15 How Covid-19 has changed the face of Irish shopping
16 Coronavirus lockdown steps could remain into winter, says expert
17 Man City to investigate Kyle Walker over lockdown sex party
18 Coronavirus: Social distancing on the beach as people ‘get the message’
19 Mary Lou McDonald: This crisis shows that Sinn Féin was right
20 An ‘Asian flu’ pandemic closed 17 Dublin schools in 1957
21 Netflix has revealed its most-watched content. You might be surprised
22 Make a move to Irishtown – the affordable side of Dublin 4
23 Queen Elizabeth invokes spirit of second World War in speech
24 Five men charged after garda car attacked at Traveller halting site in Cork
25 Fintan O’Toole: Earth has a toxic virus – us
26 A letter to Ireland from Italy: this is what we know about your future
27 Covid-19 testing: Irish pharma firms source raw material to make reagent
28 Are holidays booked for July and August going to happen?
29 O’Brien may pull off $1.7bn Digicel debt write-off – but at what cost?
30 Man shot dead in Belfast was suspect in Keane Mulready-Woods murder
31 Acclaimed Connemara writer Tim Robinson dies at 85 from coronavirus
32 Fintan O’Toole on Tim Robinson: ‘One of the greatest writers of lands’
33 TV Guide: 24 of the best TV shows to watch this week
34 David McWilliams: We must loosen up on financing pandemic spending now
35 Nurses warn significant numbers will not be able to work without childcare
36 Chris Johns: A shopping list for the post-Covid-19 world
37 Irish woman in Sweden: No lockdown, little distancing, people still shaking hands
38 Unions again urge change in wage subsidy scheme
39 Scotland’s chief medic ‘sorry’ for breaching coronavirus rules to visit second home
40 Seán Moncrieff: I’m sick of hearing this is the new normal
Real news has value SUBSCRIBE