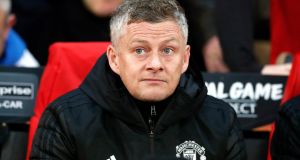 Manchester United’s comprehensive 5-0 Old Trafford win over Club Brugge last night seen them progress to the last 16 of the Europa League with a 6-1 aggregate victory. Odion Ighalo netted his first goal for the club, scoring in-between Bruno Fernandes and Scott McTominay goals on a night when Fred’s brace wrapped up a seventh game unbeaten. Celtic’s European journey is over after they suffered a 4-2 aggregate defeat to Copenhagen. Following a 1-1 draw in the first leg, the Danes took the lead early in the second half at Celtic Park through Michael Santos, only for Odsonne Edouard to haul the Bhoys level from the penalty spot with seven minutes remaining. With the game poised for extra-time, Copenhagen silenced the partisan home crowd with two goals in the dying minutes from Pep Biel and Dame N’Doye. Arsenal also crashed out of the competition - Pape Abou Cisse’s 53rd-minute header forced extra-time at the Emirates Stadium, during which Pierre-Emerick Aubameyang’s goal was cancelled out by a Youssef El-Arabi strike to send last year’s beaten finalists out via away goals. Wolves unsurprisingly booked their place in the last 16 despite suffering a 3-2 defeat at Espanyol (6-3 aggregate), with Matt Doherty among the goals. Tonight Norwich host Leicester City in the Premier League, while Shamrock Rovers v Dundalk is the headline act in the night’s four League of Ireland Premier Division fixtures.

Leinster’s winning machine faces a serious threat with the visit of Glasgow to the RDS this evening. D’arcy Rae’s inclusion in Dave Rennie’s match-day 23 means it will be a Glasgow squad containing 15 capped players making the short trip across the water. Leo Cullen has retained seven of the Leinster team that won away from home against the Ospreys in the Gnoll - in a repeat of last year’s league final with 12 straight wins and a clean European record on the line.

1 Coronavirus: Travel beyond 2km permitted for food shopping as construction workers confirmed ‘non-essential’
2 Coronavirus: The list of businesses allowed to stay open under new measures
3 Late Late Show with Miriam O’Callaghan: The most surreal primetime TV I’ve ever watched
4 Coronavirus: Oxygen equipment meant for Ireland held back by Italy
5 Coronavirus: Essential workers should carry indentification, Garda Commissioner says
6 Coronavirus: Spain’s death toll rises by 832 as global cases exceed 600,000
7 Irish writers on Covid-19: ‘We’re all having a shockin’ dose of the wombles’
8 Father of three deceased children appeals for letters during isolation
9 David McWilliams: We need to totally reimagine economics
10 I knew I’d recover from Covid-19. But when Mam was struck down … that floored me
11 Coronavirus: People must stay at home, with limited exceptions, until Easter Sunday
12 Coronavirus: People told to stay at home in virtually all circumstances
13 ‘Stop trying to be superheroes’ – principal’s message to parents
14 Laugh in the time of Corona: Favourite funny books
15 Coronavirus: The full list of new restrictions
16 British exceptionalism backfires in style as Johnson tests positive for coronavirus
17 Coronavirus ‘cocooning’: the community wraps a soft blanket around its most vulnerable
18 UK needs to be honest about its Covid-19 strategy
19 Irish doctors return from Australia - ‘You don’t run away from things like this’
20 Inside the Government's battle against coronavirus
21 Wetherspoon’s panto-villain chairman may have the last laugh
22 Coronavirus: Nursing home staff will not ‘just walk out’ on residents
23 Coronavirus: Galwegians adjust to a new traffic-free reality
24 Fintan O’Toole: We are learning how much we rely on low-paid workers
25 Carry on trading: The businesses working hard to keep us fed, and workers paid
26 Coronavirus: Motorists must slow down to avoid overburdening hospitals – RSA
27 Cliff Taylor: A big recession is coming but it’s not a rerun of 2008
28 ‘This is not nearly over’: Coveney calls for new government to tackle ‘invisible enemy’
29 Coronavirus: Wuhan begins to lift lockdown allowing some normality to return
30 Escape from Peru: Within seconds, my flight jumped from €750 to €4,500
31 Passengers and agents allege Aer Lingus is breaking law on refunds
32 Will Covid-19 force Primark to rethink decision not to sell online?
33 Jennifer O'Connell: Covid-19 is normalising mass surveillance of citizens
34 ‘Ross, from this morning, you’re going to be home-schooling Honor.’ I laugh out loud
35 Eamon Ryan: Why we need a national unity government
36 Pat Leahy: Five reasons a government of national unity is a bad idea
37 Murder Most Foul: Bob Dylan’s strange, meandering, comforting 17-minute new song
38 Only veterans with specialist skills will be re-enlisted in Defence Forces
39 Ban on evictions and rent freeze in new emergency legislation
40 Coronavirus restrictions: Full text of Leo Varadkar’s announcement
Real news has value SUBSCRIBE