From chain-blue lightening fighters to centre court maestros, time waits for no man 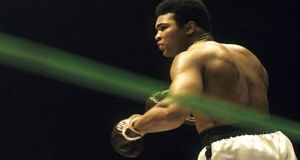 In 1980 Muhammad Ali fought Larry Holmes for the WBC belt in an attempt to win the heavyweight championship a fourth time at 38, but it was not to be. File photograph: The Irish Times

Well, ho hum, yes, it nearly is always the boxers isn’t it. Sugar Ray Leonard, who dominated four weight divisions and was king of comebacks, tried it again at 40-years-old and was shredded by a 34-year-old Hector Camacho.

Exhausted by his success on the court, Bjorn Borg, the “it” guy in tennis with his five Wimbledon titles and six French Opens walked away at 26 years old. Almost eight years later the comeback with a wooden racquet against graphite and the “it” had departed for good.

In the late 1980s Ben Johnson was the gifted thoroughbred. The Jamaican born Canadian went on to win the 100m in the 1988 Seoul Olympics in 9.79 seconds before subsequent drug tests found stanozolol in his urine and his title ripped away.

No worries, there was always Barcelona. A revived Johnson hauled himself on to the 1992 Canadian Olympic team. But then Linford Christie, Leo Burrell, Denis Mitchell and Frankie Fredericks had come along. Johnson finished dead last in his semi-final heat in 10.70 seconds.

The biggest health hazard for any sports career has always been the comeback. It just so doesn’t work.

Athletes are built that way, conditioned for the self-delusionary, pratfall. They are hot wired to succeed and to some it’s impossible to accept the slow process of time, its invisible erosion. They do the same training, look as beautiful, feel as invincible. And nothing seems to change. Except everything has.

The things that depart are edge, hunger, speed. It’s all in the nanoseconds, when they almost hit their opponent , then almost get out of their way. They know it’s there somewhere. They just have to get it out.

In 1980 Muhammad Ali fought Larry Holmes for the WBC belt in an attempt to win the heavyweight championship a fourth time at 38. The Nevada Athletic Commission ordered that he undergo a complete physical in Las Vegas. But he chose instead to check into the Mayo Clinic, who declared him fit to fight.

Actor Sylvester Stallone was at ringside and reportedly said it was like watching an autopsy being carried out on a man who is still alive. In the 11th round, trainer Angelo Dundee told the referee to stop the spectacle. How did Ali react. He fought and lost to Trevor Berbick the following year. Nothing had changed except Ali wasn’t fast enough to handcuff lightening anymore.

In 1992, still washer board sleek, Spitz, who was 41, was lured out of retirement when a film-maker waved a million bucks in his face if he could qualify for that summer’s games in Barcelona.

His times were as good or better than those he posted 20 years before. But the world had moved on and left Spitzy behind, two seconds behind and an unmade movie.

The last great junket of this century was in 2008 when we were landed in Madison Square Garden for battle of the “Super Powers”. The protagonists: a 40-year-old American on the comeback trail, Roy Jones jnr, and 36-year-old unbeaten Welsh super middleweight Joe Calzaghe, with the two agreeing to fight at light heavyweight.

All Jones was missing were his reflexes, quickness, blinding hand speed and the ability he once had to knock out opponents. Calzaghe won the slugfest and sensibly stepped away 46-0, only the 15th world champion ever to retire undefeated.

Jones won his last bout in 2018 after 75 fights over 29 years with nine losses and is now hoping to face Mike Tyson in September where fight fans will pay to watch the 54-year-old former heavyweight champion against the 51-year-old. There will be no crowd in attendance because of the coronavirus pandemic.

The quarrel will be available on streaming platform Triller at a reported cost of $49.99 or about €42. In one sense neither boxers are promising to make permanent comebacks. Then, comebacks by their nature, are rarely permanent.

Depending on how it goes and how many buy into the pay per view, you could see a trilogy emerging from this one, especially if Tyson tears up Jones over the eight rounds or shows that flicker of menace. Believe it, that’s an unlikely prospect.

“It’s really dangerous, but when you make up your mind to do something like that, you can’t tell them, ‘don’t do it’. They’re not going to hear that,” said George Foreman, a two-time world heavyweight champion.

Of course minister, broadcaster and fat-reducing grill millionaire George should know all about the dangers Tyson and Jones will face. In 1997 the WBC decided to match him against Shannon Briggs in an elimination bout for the right to face British champion Lennox Lewis.

While most people watching saw Foreman winning the match, not for the first time in his career the controversial decision went in favour of his opponent, with Briggs awarded a points win. Foreman had fought for the last time, at the age of 48.

Last year Tiger Woods, a monument to modern medicine and surgery, won the Masters, his first major win in 11 years and his 15th overall. Nobody is saying such things couldn’t be done. It’s just that sometimes they shouldn’t.

1 Frustration for Lowry and McIlroy as Li leads at US PGA
2 Juventus to ‘evaluate everything’ after European Cup exit
3 Michael Walker: Pressure mounts on Barcelona to stop slide
4 Rubber about to meet the road as counties weigh up financial hit
5 Sene Naoupu turning mind back to rugby after health scare
Real news has value SUBSCRIBE
Here is your handy guide to sport on television this week

Juventus to ‘evaluate everything’ after European Cup exit 12:06
Billy Vunipola fears Saracens demotion will hinder Lions hopes 10:48
Frustration for Lowry and McIlroy as Li leads at US PGA 09:14
Michael Walker: Pressure mounts on Barcelona to stop slide 08:00
Rubber about to meet the road as counties weigh up financial hit 06:00