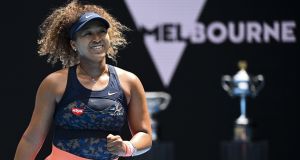 Naomi Osaka is through to the last-four of the Australian Open. Photograph: Dave Hunt/EPA

Chelsea’s strong start to life under Thomas Tuchel continued last night, as they ran out comfortable 2-0 winners against Newcastle at Stamford Bridge. First-half goals from Olivier Giroud and Timo Werner - just his second in 20 matches - were enough to move the hosts up to fourth place, as Newcastle’s slide towards the relegation zone continues. Chelsea leapfrogged West Ham in the table just hours after David Moyes’s side had moved into the Champions League places themselves with a 3-0 win over Sheffield United. Goals from Declan Rice, Issa Diop and Ryan Fredericks saw the Hammers ease past the Blades, whose misery was compounded as Ireland defender John Egan was stretchered off late on. Tonight sees the Champions League knockout stages get underway with Liverpool, who have slipped to sixth in the Premier League, taking on RB Leipzig (8pm). That fixture is taking place behind closed doors in Budapest, with Jurgen Klopp’s side not allowed to enter Germany due to the pandemic. In the night’s other fixture Barcelona welcome PSG to the Camp Nou. Mauricio Pochettino will be without former Barca star Neymar, with the Brazilian forward once again injured in February.

The dust is still settling on Ireland’s 15-13 defeat to France on Sunday - a result which realistically brought to an end any Irish hopes of a Six Nations title. And in his column this morning Gerry Thornley has suggested Andy Farrell’s side could learn a lot from the free-flowing, offloading game which Les Bleus displayed at the Aviva Stadium. He writes: “France have the capacity to conjure a try out of the blue like no one else bar the All Blacks. . . But it’s a skill that needs work and needs to be worked into Ireland’s game more than is the case, all the more so as the emphasis on lowering the tackle should facilitate offloading.” But despite Ireland being - predictably - too predictable in attack, he believes there are still plenty of positives to take from their opening two tournament defeats. “The co-opting of Paul O’Connell onto the coaching ticket has reaped a swifter dividend than could have been hoped, with the lineout and maul both much improved.” Farrell is now unlikely to experiment for a must-win third round clash with Italy on Saturday week. One player he won’t be able to use is Dan Leavy, with Leinster confirming yesterday the flanker will miss the rest of the season with a knee problem.

11 Spring clean: 13 ways to spruce up your home – with or without a tradesperson

14 Jennifer O’Connell: The Government doesn’t trust us and it’s mutual