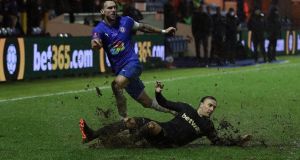 The 2020-21 Champions Cup has been suspended, with the competition’s third and fourth rounds - due to take place over the next two weekends - being cancelled yesterday. This comes after a formal directive was given to the Top14 by the French Government ordering them not to compete in cross-border matches with teams from the UK, due to the new variant of coronavirus which has sent rates spiralling. With games unable to be replayed suspension is likely to see the tournament move straight to a round of 16, which would mean Leinster and Munster progress while Connacht and Ulster drop into the Challenge Cup. And while the European postponement has suggested a circuit-breaker for sport could be imminent, in his column this morning Gerry Thornley has argued elite rugby in Ireland should be allowed to continue. He writes: “No less than the All-Ireland championships, rugby has provided a semblance of normality as well as entertainment at a time when there has been precious little of either around.”

Manchester United have been drawn to play Liverpool in the fourth round of the FA Cup, meaning the two rivals will play each other twice in two weeks following Sunday’s Premier League clash at Anfield. The winners of that tie will then face West Ham or Doncaster Rovers in the fifth round, after the Hammers edged out Stockport County at a sodden Edgeley Park last night - Craig Dawson’s late header proving the difference against Jim Gannon’s side. Meanwhile Ole Gunnar Solskjaer’s United can go three points clear at the top of the table tonight, as they face Burnley in their game in hand at Turf Moor (kick-off 8.15pm). Elsewhere basement side Sheffield United welcome Newcastle to Bramall Lane (6pm) and Everton travel to play Wolves (8.15pm).

6 ‘An inspiration’: Young poet Amanda Gorman and her words capture the moment at Biden inauguration

9 Can five minutes’ exercise a day make you fit?

10 Temperatures set to plunge to -4 degrees, bringing risk of snow

12 Miriam Lord: Back to school for foot-in-mouth specialist Josepha Madigan

13 Holohan warns of up to 1,000 Covid-19 deaths in January, calls for tighter air travel rules

14 Cottage with investor appeal in booming D4 enclave for €650k

17 The lockdown may squash the virus but what will it means for Ireland's economy?

19 Hurling between the high rise flats: My first glimpse of the emigrant life

23 Leo Varadkar and the leak: New questions for Tánaiste about GP contract

26 How to use up your Covid pantry ingredients imaginatively

32 The Irishman with big hopes making tiny houses in Berlin

34 ‘Brexodus’ of jobs from City of London to continue, says EU commissioner

37 Rugby Stats: Ruddock and Coombes tick all the boxes for Ireland squad inclusion

39 Trust the Irish to cure a runny nose

40 ‘The hellhole says goodbye’: Glee and relief in Europe as Trump departs