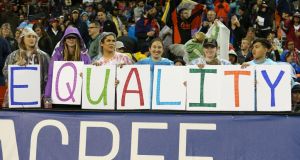 The battle for the better and fairer treatment of women’s sports teams has been a long and never-ending one.

The war is being fought on several fronts - particularly concentrated on securing more coverage in local and national media and, hand-in-hand, vying for the public’s attentions.

However, perhaps the most depressing battle must be the one with their own representative bodies.

The Irish women’s squad are not alone.

The squad had threatened to boycott the 2017 World Championship, which began on Friday.

It meant a very late game of chicken, with the landmark deal leaving the team with only a few days to prepare for its opening game - a clash with arch-rival Canada, which the Americans still won, 2-0.

The deal followed 15 months of negotiating, with the squad demanding more financial assistance.

The “nuclear” option of boycotting the biggest tournament for the sport outside of the Winter Olympics was taken because the squad were tired of being treated “like an afterthought” by their federation.

It is a familiar story for many women’s national squads - playing sports they love in incredibly demanding circumstances, while also trying to hold down full-time jobs. And doing so while feeling like an “afterthought”.

Previously, USA Hockey gave the women $1,000 (€940) a month in the six months leading up to Olympic tournaments. Now, each player will be guaranteed at least $2,000 per month year-round and will be eligible for more generous performance bonuses. The women also pushed USA Hockey to put more effort into promoting the game among women and girls.

While the hockey deal has been done and dusted, the US women’s national team are still negotiation with US Soccer about travel, accommodation, decision-making and, of course, pay.

The groups met at the weekend in Dallas ahead of the start of the league season in less than a fortnight.

When the negotiations began last year, players had talked about “equal pay” with the men’s national squad.

Lately, however, “equitable and fair” has become the catchphrase,

Still, progress has been slow and less than amicable. Last year, US Soccer sued the women’s team’s players’ union to enforce the existing agreement. The union responded by having prominent players file a wage-discrimination complaint against US Soccer with the Equal Employment Opportunity Commission.

The start of the National Women’s Soccer League season on April 15th has added momentum and urgency to the talks.

On both sides of the Atlantic, the battle continues.