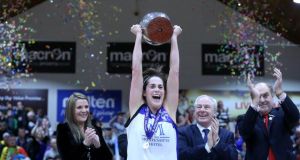 Montenotte Hotel Cork captain Gráinne Dwyer after leading her side to victory in the National Cup final against UL Huskies at the National Basketball Arena, Tallaght, in January. Photograph: Inpho


It was this time last year that we chose basketball’s Michelle Fahy as our sportswoman of the month after her MVP (Most Valuable Player) performance in the Superleague National Cup final, when she drove University of Limerick’s Huskies to victory over Team Montenotte, Glanmire.


Exceptional effort
By then, UL had lost just one match in almost two years, so it was going to take a special effort to dethrone them in 2014 and stop them from completing a three-in-a-row.

Well, Montenotte produced a very special effort at the National Basketball Arena in last month’s final, avenging their 2013 defeat by beating UL 93-87 in overtime in an exhilarating match, taking their first title since 2009.

A see-saw affair it was too, with UL rallying in spectacular style after Montenotte had led by 12 points at the break. With just minutes to go the defending champions were 72-67 up and seemed set to retain their crown, but Montenotte fought back. And by the time the buzzer went the sides were level, 85-85.

Led by their inspirational and indefatigable captain Gráinne Dwyer, the Cork team, coached by Paul Kelleher, pushed on in overtime, Dwyer bringing her tally for the match to 21 with further baskets. She ended up top scorer for her side, beating her sister Niamh to the honour by two points.

Montenotte, then, prevailed, and Gráinne Dwyer was named the final’s MVP, more than enough to be added to our roll of honour that already features four basketball players, Jillian Aherne (2004), Carmel Kissane (2005), Marie Breen (2007) and, last year, Fahy.

The Sportswoman of the Year judging panel comprised Lindie Naughton ( Evening Herald ), Greg Allen (RTÉ Radio) and Mary Hannigan ( The Irish Times ), has been joined this year by Irish Examiner columnist Joanne O’Riordan, the subject of a new documentary, No Limbs No Limits , made by her brother Steven which will be screened at the Savoy next Saturday as part of the Dublin Film Festival.