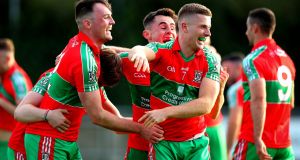 Ballymun Kickhams finally put to bed the lingering charge of underachieving by dismantling reigning champions Ballyboden St Enda’s in yesterday’s Dublin senior football final. Read Sean Moran’s report from Parnell Park: Ballymun Kickhams 1-19 Ballyboden St Enda’s 0-8. In arguably the biggest upset of the season to date, football kingpins Corofin, who earlier this year became the first club to win three successive All-Irelands, suffered a first defeat in 50 matches in the Galway semi-finals against Mountbellew-Moylough. Ballyhale were simply awesome as they secured a three-in-a-row of Kilkenny hurling titles, their 18th in total, with the minimum of fuss against Dicksboro, while Sixmilebridge put back-to-back Clare Senior hurling title wins together by defeating underdogs O’Callaghan’s Mills by eight points. The GAA intercounty championships are just 33 days away now and Malachy Clerkin explains why we need a button for the buzz of the GAA crowd: “Five weeks, lads and lassies. If there aren’t whole departments in RTÉ and Sky beavering away on this already, Croke Park need to have a word.”

John Catlin, a globetrotting American who has broadened his horizons to reach new boundaries, did what has become normal for him: he has discovered the art of winning during lockdown, and he added the Dubai Duty Free Irish Open to his curriculum vitae with a fine performance at Galgorm Castle. For the home contingent, it proved to be a hugely disappointing weekend. The honour of finishing as leading Irishman went to Jonny Caldwell, but he was a distant tied-54th. Catlin earned a greatly diminished cheque for €199,750 for his win. From 2017 to last year, it was a Rolex Series event and the hope is that the DDF Irish Open will, next year, return to its rightful place as one of the European Tour’s showpiece tournaments.

1 Black Friday has become Black November for Irish retailers
2 Developer’s impeccably restored Fitzwilliam Square Georgian for €3.5m
3 Covid-19: Pressure over breakdown in tracing system intensifies as State enters Level 5
4 One hundred Irish retailers for all your online Christmas shopping
5 Nearly 400 Brazilians have tested positive for Covid-19 in Ireland, data shows
6 How long can Government afford to keep State pension age at 66?
7 Should women erase men from their lives? This writer thinks so
8 Miriam Lord: All test and no trace makes Jack a very ill boy
9 Gym owner plans to defy restrictions and open
10 Welcome to Level Five: what does it all mean?
11 Des Bishop apologises to Traveller community for comments in interview
12 Newton Emerson: The Border is not the reason there cannot be a zero-Covid policy
13 Covid-19 laws: What can gardaí enforce and what penalties can be given?
14 Andy Farrell reshuffles his hand for rescheduled Italy game
15 Varadkar says ‘dumping’ contact tracing problem on GPs ‘unfair’
16 Suzanne Lynch’s US Election Diary: Trump and Biden prepare for final debate face-off
17 Covid-19 outbreaks in schools almost double in one week
18 Suzanne Lynch’s US Election Diary: Trump ‘walks out’ of TV interview at White House
19 No doctor, no pharmacy, no supermarket: I’m moving to an island
20 Top gadgets to help make your home safer this winter
21 Golf clubs must close under Level 5 Covid-19 restrictions
22 Tennis clubs to remain open in Level 5 until ‘further clarification’ is provided
23 Shock at golf clubs as sport faces shutdown in Level 5
24 Philip Reid: Hard to find the sense in closing golf clubs
25 Brexit: UK government suffers heavy defeat over ‘law-breaking’ Bill in House of Lords
26 Marquees and fleets of delivery vans: how supermarkets are ready for Lockdown 2
27 Traffic light system for Covid detection to operate at Irish airports in November
28 US election: Trump voters are energised in North Carolina but the state is on a knife-edge
29 Family settle case over death in hospital of 23-year-old woman
30 Pope must follow through on support for same-sex civil unions, says McAleese
31 Much of what we think about Covid-19 is wrong. We need to change the conversation
32 What I learned about male desire in a sex-doll factory
33 Railroading new fines and rules through Dail will undermine public support
34 Men over 45 years encouraged to exercise for 30 minutes a day
35 Why work more than 15 hours a week?
36 These lemon cheesecake bars are a little slice of sunshine
37 Extended Stillorgan terrace with design touches for €575,000
38 Six Nations - Ireland v Italy: Kick-off time, TV details, team news, standings and more
39 Sligo hospital apologises over ‘shortcomings in clinical judgment’
40 Coronavirus still ‘untreatable’ for some elderly nursing home residents
Real news has value SUBSCRIBE