Atlético dump Liverpool out of Europe, all eyes on Faugheen at Cheltenham 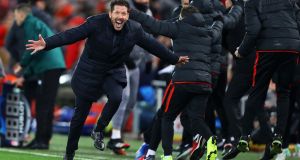 Atlético Madrid are through to the quarter-finals of the Champions League, after they dumped out holders Liverpool in extra-time at Anfield last night. Diego Simeone’s side headed into the second leg with a 1-0 lead which disappeared before half-time after Georginio Wijnaldum levelled the tie. Roberto Firmino then gave the hosts a precious lead in extra-time before a Marcos Llorente double stunned Anfield - a late Alvaro Morata strike giving Atléti a famous 3-2 win (4-2 on aggregate), as Jurgen Klopp’s side crashed out of the European Cup. Atlético will be joined in the last-eight by Paris Saint-Germain after they beat Borrusia Dortmund 2-0 (3-2 on aggregate) in an eerie Parc Des Princes, with the match being played behind closed doors. Tonight Manchester United will also be playing behind closed doors as they take on Austrian side LASK in Linz in the first leg of their Europa League last-16 tie (5.55pm), as will Wolverhampton Wanderers, who play Olympiakos in Athens.

Elsewhere the mighty Tiger Roll failed valiantly in his attempts to secure a fifth victory at the Cheltenham Festival yesterday, as he finished second to Easysland in the Cross Country. It was a fine day for JP McManus at Prestbury Park as he enjoyed four winners, including a Barry Geraghty double on Champ and Dame De Compagnie. He missed out on Defi De Seuil however, the odds-on favourite never getting involved as Politologue was a surprise winner of the Champion Chase. Today sees former Champion Hurdle winner Faugheen attempt to win over fences as a 12-year-old in the March Novices’ Chase (1.30pm), while Paisley Park will bid to defend his crown in the Stayers’ Hurdle (3.30pm). You can follow all of the action throughout the day via the Irish Times liveblog.

1 What is Houseparty, the app everyone’s talking about – and not in a good way?
2 Tuberculosis vaccine ‘potential game-changer’ in Covid-19 fight
3 Irish woman in Sweden: No lockdown, little distancing, people still shaking hands
4 Remote control: Coronavirus is changing how Ireland is governed
5 Mary Lou McDonald: This crisis shows that Sinn Féin was right
6 Coronavirus: Situation in Ireland ‘misrepresented’ because of limited testing
7 Coronavirus Q&A: How to shop safely during Covid-19
8 Covid-19: Cocooning elderly over 70 at risk of vitamin D deficiency
9 No signs of lock-down fatigue in Ireland ... yet
10 Coronavirus: About 600 private consultants in limbo after State deal
11 O’Brien may pull off $1.7bn Digicel debt write-off – but at what cost?
12 We need to cancel the Leaving Cert and give students predicted grades
13 ‘This is war’: Irish health workers on their Covid-19 crises
14 Fintan O’Toole on Tim Robinson: ‘One of the greatest writers of lands’
15 Netflix has revealed its most-watched content. You might be surprised
16 Bravo! The winners of the 23rd Irish Times Irish Theatre Awards are here
17 Acclaimed Connemara writer Tim Robinson dies at 85 from coronavirus
18 Are holidays booked for July and August going to happen?
19 Coronavirus: Efforts to tackle nursing home outbreaks to be ramped up
20 Fish and chips: How to cook them just like the chipper does
21 Cork men quarantined in Vietnam after St Patrick’s Day party
22 Coronavirus: Republic reports 22 further deaths, 424 new cases
23 Cheltenham faces criticism after racegoers suffer Covid-19 symptoms
24 Tiger King: You wait years for just one animal-collecting weirdo, then half a dozen arrive at once
25 Coronavirus: Canada criticises Trump in row over protective masks
26 Coronavirus: European solidarity sidelined as French interests take priority
27 Starmer poised to step centre stage as UK Labour Party leader
28 Cliff Taylor: Waking the economy up from its slumber will be difficult
29 Ireland has strategy to ‘break the chains’ of coronavirus - WHO’s Mike Ryan
30 Meet the couple who dashed to get married just before the lockdown
31 Debt market freeze hits sour note for Bank of Ireland
32 Covid-19: Westport braces for tough times ahead
33 Japan inches closer to coronavirus state of emergency
34 60 years of the Dr Martens boot, fashion’s subversive smash hit
35 Mother tells court she is denying ex-partner access to son over Covid-19 fears
36 Google data shows fall in crowds in Ireland as social distancing measures kick in
37 Secondary students want State exams replaced with predicted grades
38 Murder of Cameron Blair has ‘shattered our lives’, mother says
39 How fitness gurus stay healthy at home
40 Coronavirus Q&A: Should we all be wearing face masks?
Real news has value SUBSCRIBE