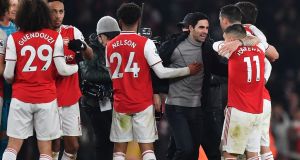 Arsenal manager Mikel Arteta celebrates with his players on the pitch after their Premier League win over Manchester United at the Emirates. Photo: Ben StansallGetty Images

So that’s it all done for another year then. After a Christmas break filled with food, drink and a frankly ridiculous amount of football on the television we’re all back to normal from today. Except for the football. That just never stops. Indeed this evening Premier League leaders Liverpool will meet Sheffield United at Anfield as they look to move back to 13 points clear at the top of the table with a game in hand. In the much closer battle for fourth place, Manchester United slipped up last night as Mikel Arteta’s Arsenal side came out fighting to record just a second win in 16 matches and move up to 10th in the process. Goals from Nicolas Pepe and Sokratis were enough to give the Gunners the victory against a United team which was once again missing Paul Pogba. Afterwards, Ole Gunnar Solskjaer confirmed that the French midfielder is still struggling with a foot injury which now requires surgery while the manager also hinted at potentially signing one or two players this month.

Yesterday’s action also saw Spurs start the New Year on an unhappy note with a 1-0 loss to Southampton which left José Mourinho ranting at an ‘idiot’ Saints coach, the ballboys and, of course, VAR. Meanwhile, in the Championship, Stoke’s 5-2 win over Huddersfield was marred by the referee briefly stopping the match after Irish winger James McClean reported sectarian abuse. Shortly afterwards there was an announcement made over the PA system and after the match it was confirmed that Huddersfield are investigating the incident.