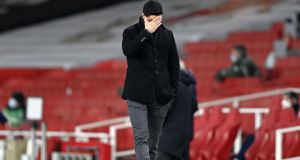 Arsenal’s three-match winning run in the Premier League came to an end last night, as they were held to a goalless draw at home to Crystal Palace. Mikel Arteta’s side were toothless in front of goal with the visitors having the best of the chances, including a late headed effort which Christian Benteke should have done better with. The draw leaves Arsenal stranded in 11th position in the league, with Palace 13th. Meanwhile Aston Villa were handed another blow yesterday as their fixture with Everton on Sunday was postponed due to ongoing coronavirus issues at the club. Villa’s previously postponed clash with Newcastle will now take place on January 23rd.

Cork GAA is mourning the death of former coach Eamonn Ryan, aged 79. The legendary Ryan led Cork women to 10 All-Ireland titles in 11 years from 2004-2015, success which came towards the end of an already glittering coaching career. Rena Buckley, who was a part of the 10 All-Ireland victories, paid tribute to Ryan: “His contribution in terms of football was massive, but he taught us huge lessons in terms of our lives. Sport was just a way for him to bring you on as a person, he developed people as much as he developed players. Sport was just a small part of that. Yeah, we’ll miss him something fierce.”

9 How Enter The Dragon became a martial arts phenomenon

18 Bill Gates: ‘I’m not trying to take anything away from Greta Thunberg, but...’

19 Budd Schulberg: The screenwriter who made Marlon Brando a star

23 The Music Quiz: What Irish showband did young Rory Gallagher play in?

26 Dublin most popular city for Brexit relocations by financial firms

27 Barry Gibb: ‘My brothers had to deal with their demons, but my wife wasn’t going to have it’

28 Owen Doyle: Calamity in Cardiff is hard to get your head around

33 Elon Musk: Grimes and I have this debate of ‘Are you more crazy than me?’

37 Deutsche Bank under pressure over derivatives sales in Spain

38 ‘You have to get up that morning and lace those shoes – words don’t teach, life experience does’

39 Sienna Miller: ‘I could have not gone out, not worn what I liked. I took them all to court instead’