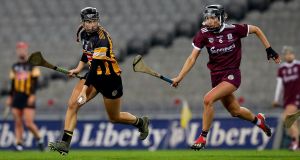 While most of us would be more than happy to write 2020 off as a bad memory, for the camogie players of Kilkenny and the footballers of Dublin, the strangest of years ended on the highest of highs.

There couldn’t have been a greater contrast between the counties when they went in to their respective All-Ireland finals, Kilkenny having lost the previous three, Dublin aiming for a four-in-a-row.

For Kilkenny, this was, remarkably, their seventh final in eight years, but only once in that spell, in 2016, had they come away from Croke Park as victors.

When they trailed reigning champions Galway by two points at half-time, they might have feared it was going to be another day of heartache, Aoife Doyle recalling that “we were panicking when we went into the dressingroom”.

The management team, though, “calmed us down”, she said, no doubt reminding the players that they had trailed Cork by six points in their semi-final before they registered their first score. No shortage of resolve, then, and they displayed it in abundance against Galway, drawing level within five minutes of the restart and never falling behind again.

One of the day’s harder tasks was choosing the player of the match, the list of contenders a lengthy one, but Doyle’s display in the Kilkenny attack got her the nod. The first of her four points, which made her the top scorer from play, was a superb effort over her left shoulder while running away from the posts, but just as valuable was her tireless work rate, Doyle harrying and hassling the Galway defence for the duration of the game.

Sinead Goldrick was no less industrious in Dublin’s five-point victory over Cork, which completed their four-in-a-row. There was a hint of an upset in the air when Cork led by three points at half-time, but Goldrick’s second half marking of the prolific Orla Finn, restricting her to just one point from play, was a key factor in Dublin’s success.

The 30-year-old, now back in Australia preparing for her second season with Melbourne, was a huge influence for Dublin throughout with her pace and energy, as well as fearless tackling that repeatedly turned over possession and her peerless reading of the game. She already has seven All Stars to her name, she’ll more than likely have to make room for an eighth.

A challenging year, then, ended with Kilkenny and Dublin raising silverware in Croke Park, Doyle and Goldrick our sportswomen of the month for December, both for their own outstanding performances and as representatives of their triumphant teams.