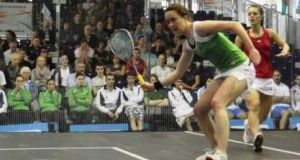 Aisling Blake is last month’s sportswoman of the month winner

While the emergence of long-time international team-mates Madeline Perry and Aisling Blake only a few years apart proved to be a boon for Irish women’s squash, Blake would have been entitled to regard the timing as a little unfortunate.

While she has carved out a career on the professional circuit that now sees her ranked just outside the world top 20, the title that persistently eluded her was the national one.

Year after year the Sligo native – at 31, five years Perry’s junior – missed out on the senior Irish title as her nemesis racked up 13, more than a few of them with victories over Blake in the final, and she must have been beginning to conclude it just wasn’t meant to be.

Until last month, that is.

The year before, Blake lost out again to Perry in a five-set final, but this time she prevailed, finally getting to her hands on the the trophy and add that senior national title to her CV after an 11-8, 5-11, 11-6, 11-2 victory at Fitzwilliam.


Special moment
It was, then, a special moment for the Amsterdam-based player who, after completing a business studies degree at Trinity, moved to the Netherlands a number of years ago to work with coach Liz Irving, the former world number two.

When she’s not travelling the world circuit, as well as playing club squash – she recently helped Exeter Diamonds reach the end-of-season English Premier League play-offs for the first time – Blake is also a voice for her fellow professionals. In 2011 she was elected to the board of the International Women's Squash Association as the players’ representative and, at the beginning of the year, was elected president of the association.


Helped Ireland
Last year, along with Perry and Laura Mylotte, she helped Ireland reach their first European Championships final since 1989, only going down 2-1 to England – who have lost just one final in 35 years.

With her team-mates, then, she collected a silver medal, making Ireland the second-ranked team in Europe (they are ranked sixth in the world) going in next month’s Championships.

Blake’s ambition is to break in to the world’s top 20 (her current ranking is 23), and after finally winning that national senior title, she most probably feels anything is possible.