Aaron Connolly ruled out for Ireland; Healing process can begin in Champions Cup 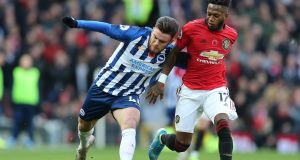 Brighton striker Aaron Connolly is out of Ireland’s two international games over the coming week due to a groin strain picked up against Manchester United on Sunday. Ireland manager Mick McCarthy, who already has 27 players in for the two games against New Zealand and Denmark, said he will not call in any replacement. The Republic of Ireland women’s team need to avoid any blemishes against Greece tonight to remain on track for an automatic route to the 2021 European Championship finals. That match is live on RTÉ2 at 1pm Irish time. Last night Dundalk hit Linfield for six goals to add late silverware to an already stellar season by claiming the Unite the Union Champions Cup with a 7-1 aggregate triumph.

In his column this morning, Gerry Thornley explains how the Champions Cup can begin Irish rugby’s healing process: “plenty of those on the Japanese expedition as well as those overlooked will feel they have something to prove and should be in the condition to do so.” Leinster coach Stuart Lancaster has shed light on the province’s system of ‘unstructured chaos’ while insisting there is no one system that is right and one that is wrong. He says: “what we are trying to achieve is a balance between the real importance of starter plays and execution at set-pieces and everything else – to be very good at that but also be very good when the game becomes into phases three to 10, let’s call it.” With Robbie Henshaw’s return to training this week, Leinster will have the luxury of picking from almost all of their World Cup players for the first round of the Champions Cup this Saturday against Benetton.

1 Why our love for Leo is withering on the vine
2 No obvious signs of injury on remains of McGinley children
3 Varadkar blames British ignorance of Ireland for Brexit impasse
4 Una Mullally: Those attacking Sinn Féin have become cheerleaders in reverse
5 Patient advocate on HSE board resigns in protest at ‘tokenistic’ treatment
6 Coronavirus: death toll rises to 81 with nearly 3,000 confirmed cases
7 Fine Gael to stress economic warnings as concerns grow
8 Ken Early: Klopp adds spice to ‘uninteresting’ FA Cup replays
9 Dancing with the Stars: Glenda Gilson sinks like Titanic
10 I’m Irish and I live abroad. Why have we been forgotten in Election 2020?
11 Fintan O’Toole: The terms of Brexit hold a great irony
12 The Offload: Doris, Kelleher and Cooney to give Ireland a new look
13 Pilita Clark: When a rude boss keeps you waiting, why not walk out?
14 Democrats dream of John Bolton bombshell in impeachment trial
15 Six Nations 2020: Ireland looking for a fresh start under Andy Farrell
16 Grammys 2020: Ariana Grande’s billowing ballgown stuns a risk-taking red carpet
17 Comcast acquires Irish cloud-based telco Blueface
18 ‘It’s something you don’t want to hear. You always think it happens in other places’
19 Coronavirus outbreak: Irish community endures Hubei lockdown
20 Brexit is a collective English mental breakdown
21 Gonzaga shock Blackrock for historic Leinster Senior Cup win
22 Why are Fine Gael and Fianna Fáil refusing to go into coalition with Sinn Féin?
23 US president Donald Trump pays tribute to Kobe Bryant
24 Snow and hail makes driving conditions dangerous in west
25 Ireland’s housing crisis in five revealing graphs
26 Swing voters still silent as week three of election campaign begins
27 Bobby McDonagh: Light a candle for Brexit
28 All in the Game: Kylian Mbappé’s Gruyère nightmare
29 ‘We serve neither Queen nor Commisar’: The birth of the Provisional IRA
30 Five things to watch out for in Apple’s earnings
31 ‘If something happens to me, what will happen to my girls?’
32 US threatens retaliation against EU over proposed carbon tax
33 Irish-founded ‘kid tech’ company SuperAwesome gets Microsoft backing
34 Henderson Park seek €400m+ for prime Dublin office blocks
35 Free culture guide: Great galleries, gratis gigs and good grub that won’t cost you a cent
36 ‘Life is busy . . . this can be difficult for a new vegetarian such as me’
37 Irish Times Irish Theatre Awards: Who has been nominated?
38 Money matters: ‘My father embarrassed us with his haggling’
39 David McWilliams: A fall in house prices should be our goal
40 Opioid executive admits to ‘no morals’ ahead of prison term
Real news has value SUBSCRIBE