Aaron Connolly impresses for Seagulls; a famous night at Belfield 35 years on 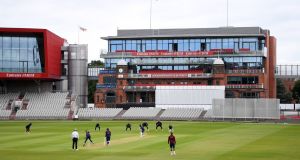 The West Indies play the first day of a warm-up match at Old Trafford on Tuesday. Photograph: Gareth Copley/PA

An Aaron Connolly-inspired Brighton edged closer to Premier League safety last night, as they earned a goalless draw away to third-place Leicester City. 20-year-old Republic of Ireland striker Connolly earned the first half penalty which Kasper Schmeichel saved from Neal Maupay, however Graham Potter’s Seagulls were fully deserving of a point which moves them six clear of the relegation zone. It was another grim night for David Moyes’ West Ham however, as they were beaten 2-0 away to Jose Mourinho’s Tottenham thanks to a Tomas Soucek own goal and a Harry Kane strike. The Hammers could find themselves in the drop zone tonight if Bournemouth or Aston Villa pick up points - they play Wolves and Newcastle away respectively (kick-offs 6pm). Elsewhere tonight, Manchester United are finally home again as they welcome Sheffield United to Old Trafford (6pm), while Everton travel to Carrow Road to take on Norwich (6pm). In the evening’s later kick-off, Liverpool can edge closer towards that elusive league title as they face Roy Hodgson’s Crystal Palace at Anfield (8.15pm).

Elsewhere this morning Ian O’Riordan has looked back to a famous night at the Belfield track 35 years on; when four Irish athletics greats - Eamonn Coghlan, Ray Flynn, Frank O’Mara and Marcus O’Sullivan - combined to break the 4x1 mile relay world record, raising money for Ethiopia in the process. The Goal National Sports Day was the brainchild of John O’Shea, and the event attracted around 8,000 spectators and raised more than £25,000 in bucket donations alone on the night. O’Shea recalls: “I remember early on in the evening, there was no one there, and then suddenly they just started pouring in, and you couldn’t get near the track. The atmosphere was incredible, and the four lads were oozing desire.”

1 Health officials ‘very concerned’ about foreign travel, says Donnelly
2 Why are markets booming when a crash is on the way?
3 World, look away now – these are dark days for the United States
4 ‘Ten of the best books set in Ireland’: Does the Guardian get it right?
5 Michelle O’Neill will not step aside ‘under any circumstances’ despite calls from other parties after Storey funeral
6 ‘Grossly irresponsible’- Waterford mayor condemns house party of 60 people
7 Irish holidaymakers have been thrown under the bus
8 Bobby Storey: The IRA's planner and enforcer who stayed in the shadows
9 How much do Irish people earn? And what will Covid-19 do to our wages?
10 Who are the new junior ministers? All their profiles are here
11 Trump says Covid-19 will disappear after US reports record increase
12 Thousand acre Offaly farm guiding €9m biggest land sale in years
13 Open Ireland as soon as possible - Tourism chief warns of 'catastrophic' impact of pandemic
14 Shared parenting: fathers being forced to go down ‘adversarial route’
15 Woman who said ‘I have the virus’ and coughed in direction of paramedics jailed
16 Could your old car be giving away all your secrets to its new owner?
17 ‘I felt something furry move under my hand. Man alive, I am terrified of rats’
18 Netflix: 10 of the best new shows and films to watch in July
19 Irishwoman in Athens: ‘Being stuck in Greece isn’t exactly a hardship’
20 Dunnes Stores trials online ordering from Cornelscourt outlet
21 Full line up of junior ministers unveiled as Taoiseach accused by one TD of snub
22 Newton Emerson: A unionist-free Seanad? Nobody minds really
23 How the Government can woo young Sinn Féin supporters
24 Up to 400 jobs saved in Cavan as MML takes stake in CG Power Systems
25 Permission sought for €150m film and media campus in Wicklow
26 Husband of Jean Eagers charged with her murder
27 Trophy Curragh stud farm with exceptional pedigree for €4m
28 Sex, swearing and flushing the loo: 10 films that broke taboos
29 Limerick’s Shane Dowling forced to retire at 27
30 Tánaiste questions number of construction workers on pandemic payment
31 Covid-19: Publicans and restaurateurs row over calls for VAT cuts
32 In turmoil on and off the pitch: Where did it all go wrong for Barcelona?
33 Expert tips: A psychotherapist on how to look after your relationships
34 Russians grant Putin right to extend his rule until 2036 in landslide vote
35 Bill Taylor obituary: A Bohemians player and man of learning
36 ‘I wouldn’t fly if I didn’t think it was safe’ says passenger boarding flight at Dublin Airport
37 Ireland left out as EU opens borders to 15 states including Australia, Canada and Japan
38 Rugby impasse continues as no deal reached in fourth round of IRFU salary talks
39 Ryanair passenger traffic slumps 97% as shutdown restricts travel
40 Covid-19 risks from international travel remain dangerously high
Real news has value SUBSCRIBE