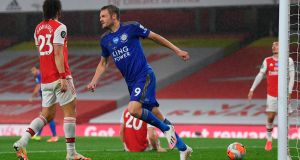 Leicester’s Jamie Vardy celebrates after equalising for his side during their 1-1 Premier League draw with Arsenal. Photo: Shaun Botterill/NMC/Pool

It’s still over a month away before top level rugby will return to these shores but already we can see a glimpse of the future in Super Rugby AU where World Rugby’s new laws are being trialled in the domestic competition. The amendments proposed by World Rugby include the 50:22 and 22:50 kicking options, reducing the tackle height to waist level, the introduction of an infringement limit (cumulative penalties and free-kicks for teams) punishable by a yellow card to the player taking his team over that threshold and a goal-line dropout. The statistics from the opening weekend of Super Rugby AU are positive, writes John O’Sullivan. Meanwhile, home-based clauses have long caused debate in international rugby and the current case of Manu Tuilagi, mixed with the implications of the ongoing pandemic, may cause a shift in attitude in England.

On to soccer and Chelsea jumped up to third last night, tightening their grip on a Champions League spot, with what turned out to be a harder-fought victory than it looked at Crystal Palace. After Olivier Giroud and Christian Pulisic fired them into an early lead, it was up to Tammy Abraham to seal the points in the second half after a spirited Palace comeback. Meanwhile, Arsenal’s chances of grabbing the last Champions League spot look decidedly slim after Jamie Vardy’s second half equaliser saved a point for Leicester at the Emirates to keep them four points ahead of Manchester United. Speaking of Arsenal, one of their greatest ever managers is the subject of today’s Game Changers series where Keith Duggan writes that Herbert Chapman’s futuristic vision and methods paved the way for football managers for decades after his time.