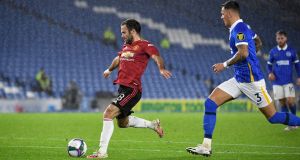 It’s a big night on the continent for Dundalk tonight, with the Lilywhites taking on champions of the Faroe Islands KÍ for a place in the Europa League group stages. Filippo Giovagnoli’s side head into the Aviva Stadium play-off as odds-on favourites to progress and secure a guaranteed windfall of around €4 million. It would be just the third time a League of Ireland side has made the Europa group stages - Dundalk also achieved the feat under Stephen Kenny in 2016-17 - while a victory for the underdogs would see them become the first Faroese side to ever make it into a major European competition. However, for Giovangnoli, the favourites tag hangs heavy: “They are a team that are really dangerous. They don’t need to have the control of the game; they can be dangerous at any moment the way they play.” The game kicks off at 7.30pm at the Aviva, and it being broadcast live by RTE. Elsewhere in the Europa qualifiers tonight, Celtic take on FK Sarajevo (7pm), Spurs play Maccabi Haifa (8pm) and Rangers welcome Galatasaray to Ibrox (7.35pm).

Manchester United are through to the quarter-finals of the League Cup after an unconvincing if ultimately emphatic 3-0 win over Brighton at the Amex Stadium last night, Scott McTominay, Juan Mata and Paul Pogba with the goals. Manchester City also progressed after a 3-0 win away to Burnley which saw summer signing Ferran Torres complete the scoring after a Raheem Sterling brace. Everton beat West Ham 4-1 while Newcastle needed an 87th-minute equaliser and a penalty shootout to squeeze past League Two’s Newport County.